When & Where to Watch Chelseas Players During the October International Break

No less than 13 Chelsea players have jetted off to join up with senior international sides across the globe.​

It's one of the biggest hauls for a Chelsea squad in recent memory, and that's testament to the Blues' exciting youngsters who have proven themselves at the top level. Some good luck with injuries, and Chelsea should have even more internationals next time.

In the meantime, here's how you can follow the current crop of internationals. This has been a pretty good year for goalkeeper Kepa Arrizabalaga, who has moved ahead of ​David de Gea in the pecking order for the Spanish national team.

He will be looking to keep it that way when Spain face Scandinavian challengers in both Norway and Sweden in the next batch of their Euro 2020 qualifiers.

However, there's no place in the squad for either ​Marcos Alonso or ​Cesar Azpilicueta. A regular in Frank Lampard's ​Chelsea side, Andreas Christensen has long been a core part of the Danish setup.

He has featured in all but one of their Euro 2020 qualifiers so far and is expected to keep that run going when they face Switzerland in the coming days.

Denmark sit second in Group D, and a win over the Swiss could be what it takes to seal qualification. One of the biggest international groups at the club​, France have called up three of Chelsea's squad as Kurt Zouma, ​N'Golo Kanté and ​Olivier Giroud will all represent Les Bleus.

Kanté and Giroud are both core parts of Didier Deschamps' side, whereas Zouma is often used as a reserve, but all three remain vital to France.

They could all feature in some capacity when France come face to face with Iceland and Turkey in their own Euro 2020 qualifiers. One of the biggest feel-good stories around Chelsea this season has been the emergence of their English talent, and the Blues now boast four players in Gareth Southgate's squad.

​Ross Barkley is already established in the side, while Mason Mount was handed his debut during the last break. They will be joined by the returning Tammy Abraham and potential debutant Fikayo Tomori.

England's Euro 2020 qualifiers come in the form of the Czech Republic and Bulgaria. 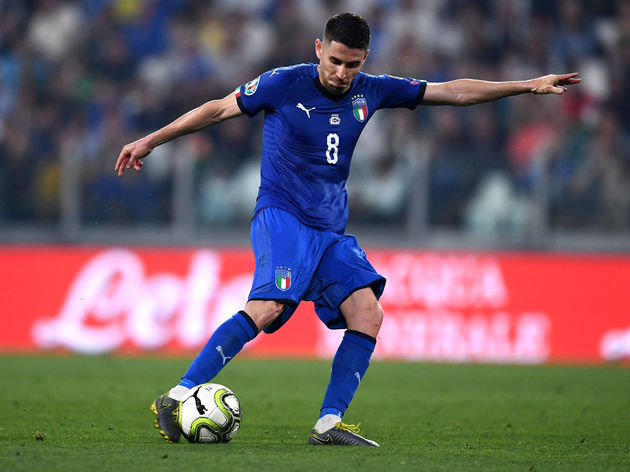 The latest fan favourite at Stamford Bridge is Jorginho, who has finally endeared himself to the Chelsea faithful through his hard work and positive attitude.

He continues to be a vital play for the Italian national team and will be hoping to seal qualification to Euro 2020 during this break.

Italy will take on both Greece and Liechtenstein in the knowledge that they can book their place in the tournament with two wins, but could potentially need even less than that if results go their way. After missing the last internationals with a calf injury, midfielder ​Mateo Kovacic is back amongst the squad this time.​

He fills in a number of different roles for Croatia, rotating with the likes of ​Luka Modric, ​Ivan Rakitic and Marcelo Brozovic.

Croatia will look to continue their good start to their Euro 2020 qualification campaign when they take on Hungary and Wales over the break. Cast your eyes away from Europe and you'll find Christian Pulisic in action for the United States.

We may not have seen much of Pulisic in a Chelsea shirt, but the winger is a key part of Gregg Berhalter's international side, so this break will give him the chance to play some extended minutes.

The USA will get their CONCACAF Nations League campaign underway when they meet both Cuba and Canada. The only Belgian remaining in Chelsea's senior side is ​Michy Batshuayi who, like Pulisic, has struggled for minutes at Stamford Bridge this season.

He will be hoping for more game time for Roberto Martinez's side, although he has Inter's ​Romelu Lukaku to compete with.

Nevertheless, he will expect to earn plenty of minutes against both San Marino and Kazakhstan in Belgium's Euro 2020 qualifiers.