​Chelsea picked up their first win of the season on the road to newly promoted Norwich City on Saturday, but it wasn't all plain sailing for Frank Lampard's side in the searing 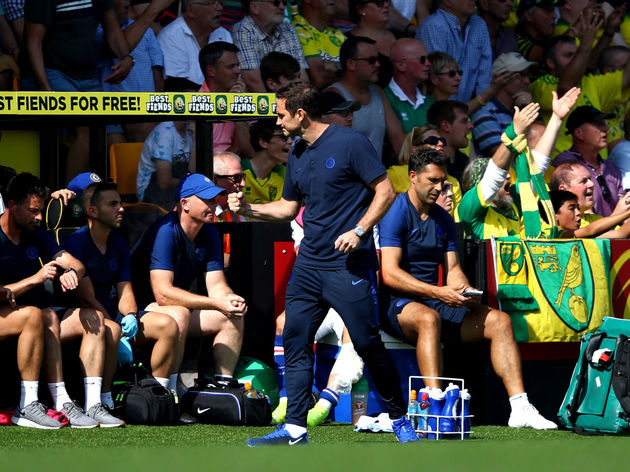 Questions have been flying around about where Chelsea would find their goals this season, but Tammy Abraham answered their critics with a confident finish three minutes into the match.

Great ground volley and a great goal by Tammy Abraham..

The Blues let Norwich cut through their defence like a hot knife through butter, with 21-year-old

Cantwell is a baller

cantwell is a proper one

Cantwell for a call up this season? gbenglooks like a tidy player #NORCHE

Mount and Abraham with the early goals. Great to see youth finally getting its chance at @ChelseaFC. Hopefully this ambitious approach will get the patience it deserves.

Pulisic and Mount are quickly becoming something to fear. Silky pass, great finish. This is good stuff from Chelsea.

5 goals in 2.5 games for Teemu Pukki. That’s not a bad start to his Premier League career. 

Cracking atmosphere at Carrow Road and what a game so far. The rise of Teemu Pukki continues! ⚽️ #NORCHE #PL

So do we need VAR to check VAR now?

This is an absolute robbery, the VAR checked it and didn't give it. WHAT IS THE USE OF VAR IF THE PERSON USING IT STILL HATES CHELSEA?

Can't understand how people think Tammy Abraham is only championship level. What he did there at his age should be enough evidence that he can score goals in the prem.

Tammy Abraham will score more goals than Rashford this season. Then it will be quiet.

I’m so pleased for Tammy Abraham (and Mason Mount) today. Not just two goals but two superb finishes today. Buzzing for him and Lampard 