Frank Lampard: Chelsea Would Be Foolish to Move for Club Legend Despite Early Derby Success

​As a Chelsea fan, even one who's infatuated with all things Marcelo Bielsa, you couldn't help but smile at Derby County's rousing 4-2 playoff semi-final victory over Leeds at Elland Road on Wednesday night.

To be fair, as a neutral, it was hard not to smile from the first minute, but the final whistle was particularly special, because it showed the unbridled joy that high-tension football consistently delivers, albeit to 50% of its competitors.

Only this time, it was Super Frank who was elated, because, did I not say? Frank Lampard's Derby County had won. And we were elated with him, of course we were. How could you not be? It's Super Frank. 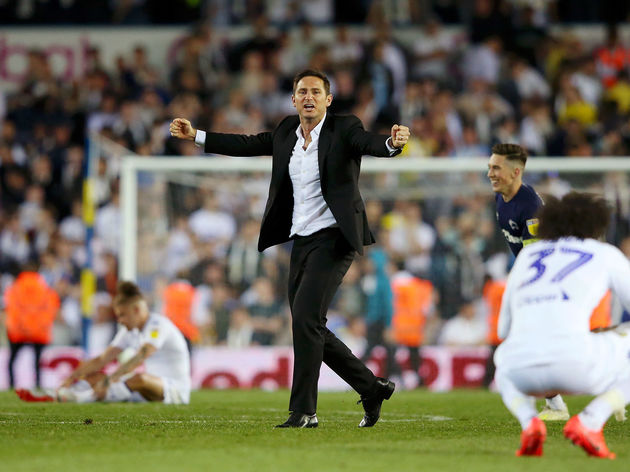 But there was also a downside to these developments in Yorkshire. Because it only served to add further fuel to the fire apparently engulfing Maurizio Sarri at Stamford Bridge. Now, 'Proper' fans have been lighting the matches around the stands for quite some time, hoping something would catch.

Unfortunately for them, the Italian was able to temper the flames with a third-place finish, Champions League qualification and a second Cup final.

But then the whispers passed from the Tiber to the Thames that AS Roma, AC Milan and Juventus would be interested in attaining Sarri's services. And then the same forces started peddling a certain ex-player as a potential replacement. And then said player's ​Derby County produced that rousing, unprecedented (in that no team had ever overturned a home leg deficit to win a Championship playoff) victory and the coronation was nigh on confirmed, fireworks and all.

Sarri would depart, regardless of success in the Europa League final, and Chelsea fans would finally get a man in the dugout that knows the club. That knows the fans. That is, in every sense of the word (well, not 'every', actually - Lamps does seem, for all intents and purposes, a good bloke) 'Proper Chels'. Because that's what all the vitriol surrounding this season has boiled down to - a sense of disillusionment, bordering on disenfranchisement, with the 'ideals' of the club. That is to say, in style both off and on the field, he's not a sh*thouse. And, in Jose Mourinho and Antonio Conte, Chelsea fans have enjoyed their managerial sh*thouses in recent times. Thus, Sarri's disconnect with the fans stems from a desire to 'improve' the club's ideology, and that kind of staring down from the nose, even if it's warranted, doesn't go down well when said 'improvements' have some teething problems.

Chastened by this perceived condescension and then emboldened by the struggles, Blues fans raged against their bespectacled, unglamorous manager, who refused to kowtow to their beliefs or sufficiently convince them of his. Rather than parading down the touchline, tie whirling around his neck, hair flowing in the wind, limbs here, there and everywhere, he absconded down the tunnel, having been unable to control a young upstart in goal.

Mourinho wouldn't have stood for that. But, in both tenures, Mourinho also wouldn't have been subjected to this level of scrutiny. Yes, he earned respect quickly, but he didn't have to, not in 2004. And that's what success does - it provokes the desire for more, whatever the cost and as soon as possible, and if someone can't deliver that instantly, they don't deserve the chance to try again.

Which is exactly why, despite some worthy grievances (and some sincerely stupid ones) with Sarri, ​Chelsea should not play the Frank Lampard card too early.

So @WilfredLaurence doesn't think this was the best Premier League title race ever! 

If I asked you to describe Lampard's managerial style, or his footballing ethos, or his tactical model, what would you say? More to the point, what would he say? Well, he's a good talker, so he'd get something eloquently across, but after you'd been charmed by his eyes and his smile, you'd think back to what he actually said and think 'eh?'.

Don't get me wrong, he has clearly got managerial potential. He's just bested one of the greatest footballing minds of all time in a hyper-pressurised two-legged tie. But he's less than a year in. People keep on calling him a 'student of the game', as if that is some kind of CV-bolstering statement.

But, while it's obviously true and certainly admirable, it outlines exactly why he is not ready. He is still a student. His handling of youth has been admirable, as you would expect from a player who was unfairly derided upon his introduction into the game and used that chip on his shoulder for the rest of his career, but youthful naivety aside, that squad was primed for a push such as this.

Wednesday night's decision to bring on Jack Marriott with a minute to go in the first half - which may or may not have been enforced anyway - was one of the first instances of a real tactical shift/play. And, to be fair, it worked, and I can hear some fans screeching that it was better than most that Sarri has made this season. And that may be so. But one sub in a Championship playoffs doesn't earn you the right to manage one of the biggest clubs in the world.

You have to have at least three on the resumé.

 “Cos all of the spies have faded away
Try not to worry, you’ll beat us some day
We beat you at home and we beat you away
Stop crying Frank Lampard” 

Seriously, though, if the club prematurely jump ship to an untested Lampard, and that ship then sinks on the back of a 'Dracaris' infused baptism of fire, born out off a level of impatience nearing malpractice, where do they go after that? They've burned almost all their other ships/bridges.

Lampard may well be the 'Prince That Was Promised', but if there's one thing we've learned about prophecies, it's that you can't rush them, nor can you covet them as destiny and place too much faith in them before it's earned. When you do, it almost always goes up in flames.