Chelsea: The Starting XI That Frank Lampard Should Pick to Face Watford

Such has been the excitement around ​Chelsea's young stars of late, the blip at home against Manchester United in midweek was something of a surprise.​

But despite the small setback, there is no doubt over who are firm favourites for the clash with bottom of the Premier League Watford. 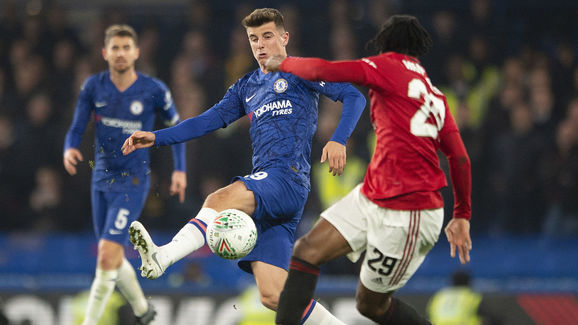 The Hornets haven't lost for three league games and their draw against ​Tottenham Hotspur proved that they can still pose a problem for the Blues. ​​Kepa Arrizabalaga (GK) - The Spanish goalkeeper has shown no reason to be dropped and he will be key to Chelsea as they look to shore up a slightly leaky defence. The Blues have already conceded 16 in the league so far this season.

Cesar Azpilicueta (RB) - The skipper has impressed with his recent performances, most notably at Ajax away. Chelsea are a young side so will it will be helpful to have the likes of the Spaniard at right back.

Fiyako Tomori (CB) - If Lampard has any selection headaches to deal with, Fiyako Tomori is not one of them. His performances have been the standout from west London side's defenders so far.

Marcos Alonso (LB) - Emerson is back in contention for the left back spot after recovering from a thigh problem but isn't fully fit, Alonso's performances and attacking threat might just keep him in the side and his goal at ​Newcastle at home will help. ​Jorginho (CM) - The Italian has become the key part of Chelsea's midfield and nearly every attack comes through the former Napoli man. Chelsea's midfield seems to look a bit less threatening without him, despite the quality they have there, which is testament to Jorginho.

Mateo Kovacic (CM) - Kovacic is developing a good partnership with Jorginho in a midfield to and has proved adept at bringing the ball out from the back. His ability to do this provides another option for Chelsea defenders bring the ball out of midfield.

Mason Mount (CM) - A few of his recent performances have been arguably below par, but one of the main reasons Chelsea are so high up compared to early expectations is because of the young Englishman's goal threat and creativity. ​Willian (RW) - The veteran Brazilian's experience offers Chelsea a lot and his recent performances have put the doubters at bay for now.

Christian Pulisic (LW) - The young American's recent games have been electric and he is fast becoming a big part of Lampard's plans. He still has work to do to keep Callum Hudson-Odoi from knocking at the door, but Pulisic is used to life and the expectations of a big club. His creativity will likely cause a poor Watford defence some problems.

Tammy Abraham (ST) - Abraham will be raring to go after being rested against Manchester United, only coming on in the 78th minute. He hasn't found the net since Southampton so will be looking to add to his impressive tally of eight league goals this season.