​Chelsea's hierarchy are planning to appoint Derby County manager Frank Lampard as Maurizio Sarri's successor regardless of the outcome of the Europa League final.

The Blues will be heading into a pivotal summer as the club prepares to serve the first half of their transfer ban, with questions raising over if current boss Sarri is the right man to lead them through the 2019/20 season. 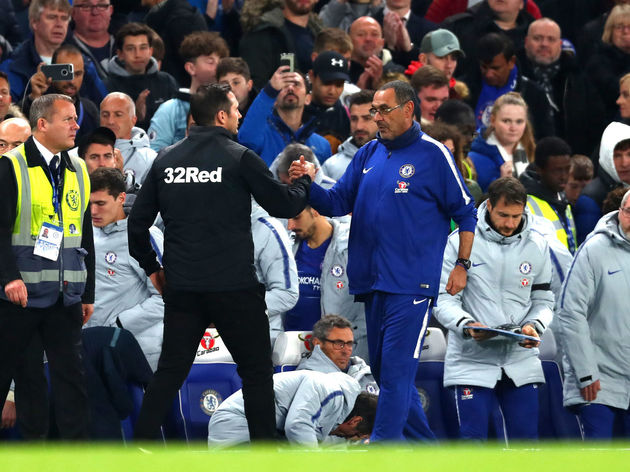 And Sky Sport Italia reports that Chelsea will be looking to replace Sarri even if the club beats Arsenal in next week's Europa League final.

The 60-year-old was brought in to replace Antonio Conte last summer, but Chelsea are now claimed to want to put their faith in their former midfielder Lampard following his success in charge of Derby County this season.

The Rams have booked their place in the Championship play-off final thanks to an outstanding comeback against Marcelo Bielsa's Leeds United, with the club setting a date with fellow finalists Aston Villa this weekend to try and restore their Premier League status.

Lampard's assistant at Derby County and former Chelsea Under-21 manager

Frank Lampard needs to stay as far away from the Chelsea manager job as possible. Club is in absolute shambles and the board needs to be replaced before he sets foot.

Fans will eventually turn against him and I'm not ready for that ever...

Massimiliano Allegri's departure from Juventus has seen Sarri emerge as a potential candidate to take over in Turin, while Roma and Inter have also been linked with the Italian.