Another crucial weekend of Premier League action has passed us by, making rather large waves at both ends of the table​.

Up at the summit, Liverpool moved 14 points clear with their hard-fought victory over Tottenham, taking advantage of Leicester's slip-up against Southampton. Manchester City looked back to their best in their all too comfortable dispatching of a woeful Aston Villa, while both Chelsea and Manchester United recorded convincing home wins as they bid for the top four.

There wasn't much else Mourinho could do but worship Klopp's managerial abilities!  pic.twitter.com/1uMw0ahgnr

At the wrong end of the table, Watford continued their resurgence easing past a downtrodden Bournemouth, while Burnley and Norwich fell to hefty away defeats and Newcastle and Brighton failed to win on the road.

There weren't too many shocks this weekend, but there sure were some cracking performances up and down the country nevertheless.

Without further ado, here are the best and brightest from the Premier League this weekend... 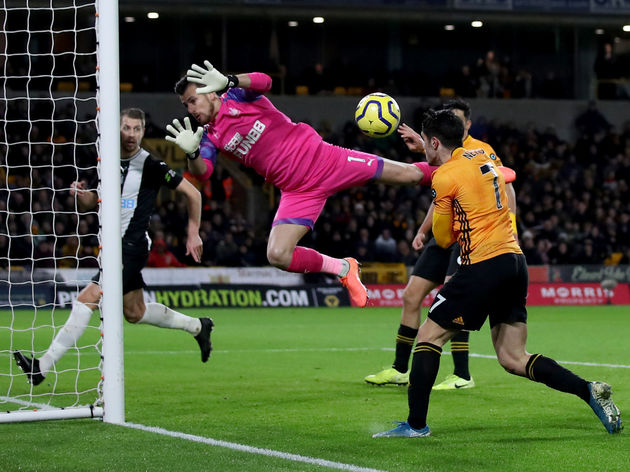 Martin Dubravka (GK) - The ​Newcastle shot-stopper is capable of a gargantuan performance every so often and, unfortunately for the Wolves attackers, he was in top form this Saturday. Good thing too for the Magpies amid a weekend marred by more injuries for Steve Bruce's depleted side...soon Dubravka may be the last man standing.

Reece James (RB) - A player with talent beyond his years, James is another ​Chelsea starlet who is taking huge strides forward in his development this season. His strong performance during the Blues' 3-0 victory over Burnley was capped with an assist and a well-earned clean sheet, once again exuding confidence at the highest level.

Virgil van Dijk (CB) - Despite some very good Spurs opportunities, Van Dijk and co. did manage to keep their hosts from scoring. A slightly different challenge up against Lucas Moura and Son Heung-min, as opposed to Harry Kane, the centre-back adapted incredibly well to the pace and agility of the Tottenham forward line. That being said, he was given a large helping hand by Jose Mourinho's negative tactics.

Michael Keane (CB) - It looks as though Carlo Ancelotti may just be the man to sort this Everton defence out. Having been in and out of the Toffees' starting lineup recently, ​Keane managed to keep a clean sheet on his return to the side and looked far stronger than he did under Ancelotti's predecessor.

Brandon Williams (LB) - Along with Mason Greenwood, Williams has been the breakout star of ​Man United's rather underwhelming season. With games coming thick and fast for the 19-year-old, he looks more and more accomplished every time he steps over the white line. His tireless running caused Norwich all manner of difficulties, and the full-back was felled for the Red Devils' second-half penalty following another lung-busting run. Abdoulaye Doucoure (CM) - The Watford midfielder looks back to his best under new boss Nigel Pearson and his goal and assist at the weekend helped the Hornets escape the relegation zone for the time being.

Juan Mata (CM) - Many have written the 31-year-old off due to his lack of influence at Old Trafford this season. But the Spaniard sure showed up against a plucky Norwich side, dictating the pace of the game and creating two of United's goals. The midfielder oozes class and will likely become an increasingly useful player for Ole Gunnar Solskjaer as the season progresses.

Marcus Rashford (LM) - Finally, Man United scored a penalty against Norwich. The Red Devils saw two spot kicks saved by Tim Krul in the reverse fixture, but ​Rashford made no mistake this time round, spearheading a fluid United front line. The 22-year-old has carried Solskjaer's men through much of the season and is truly leading by example this term. Danny Ings (ST) - The Southampton forward's incredible run of form shows no signs of letting up anytime soon. His second-half strike against the Foxes helped the Saints to avenge their humiliating 9-0 defeat to Leicester earlier in the season; something that will have tasted oh so sweet on the south coast. ​Ings now has 14 league goals this season and will be giving Gareth Southgate some food for thought ahead of Euro 2020.

Sergio Aguero (ST) - One of the greatest strikers the Premier League has ever seen was in a merciless mood on Sunday afternoon. His hat-trick saw him become the highest scoring foreign-born player of all time in the league, as well as claiming the record for the most hat-tricks in the Premier League era. The 31-year-old could probably play until he's 40...well, if he faces Aston Villa every weekend.