Cudicini - Super save from Davidson, handling from crosses was excellent. 8

Melchiot - Got forward well in first half, defended well and delt well with high balls when needed to. 7

Desailly - Enjoyed his battle with Dickov, which he won. Took a whack in the first half, but gave as good as he got. 8

Terry - Immense yet again. Dickov didn't like his 'thunder' tackle in second half. We did! 9

Baba - Took his goal fantasticlly, and defended well and got up and down, as joe cole drifted in field. Enjoyed his goal - as you can see below! 8

Gronkjaer - Won his fair share of headers and put in a couple of quality crosses for once. Substituted for Geremi in second half. 7

J.Cole - Set up Jimmy goal well with run and cross, did leave Baba a bit exposed as he drifted. Taken off for Gallas. 6

Gudjohnsen - Linked superbly with Jimmy Floyd. Quick one touches. Came off for Mutu towards end. 7

Hasselbaink - Very annoying..... in that he makes it hard to leave him out! Gotta start versus Watford. Scored one cheeky backflip, and claimed another deflected free kick. Should've had 4 by half time. 9

Gallas - shored up the defence. 7

Mutu - Great goal to end drought - Lovely to watch his interaction with our fans after. 9

Geremi - Played simple football in the middle and right touchline. 7 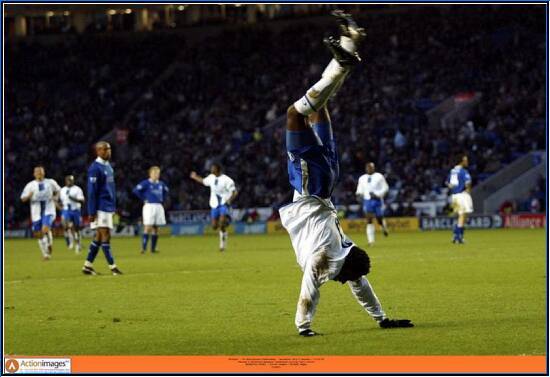 Baba is head over Heels after scoring the fourth!