Eden Hazard and an inspired performance from Ross Barkley ensured that the Blues returned from the South Coast with three points and a goal apiece as Chelsea humbled ineffectual Southampton 3-0, at St Mary’s Stadium this afternoon. Substitute Alvaro Morata finished off the job with a deft clip over Alex McCarthy after a stunning 31-pass sequence of keep ball by the players that had the fans shouting ‘Ole’ before the ball hit the back of the net.

Barkley, restored to the England set-up this week, by manager Gareth Southgate, was the lynchpin of a Chelsea midfield which probed and passed their way to victory.

Most teams will sit back and absorb the pressure heaped upon them hope for a counter-attack and Southampton fitted that bill.

But if that suggested the Saints were close to even snatching a point, they weren’t. 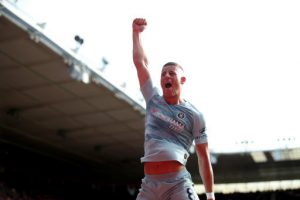 The Blues are top of the league albeit until the game between Liverpool and Manchester City later this afternoon is concluded.

Chelsea’s total dominance of the early play almost reaped dividends on eight minutes when a goal-bound shot by Willian, from just inside the penalty area was deflected onto the Saints’ crossbar and away for a corner.

A scintillating counter-attack on 17 minutes saw the Blues cut Saints apart but a Ross Barkley edge of the area shooter, inches high and wide of Alex McCarthy’s goal.

Yet despite the control of the game the home side did have the best chance on 23 minutes when Maya Yoshida saw a low, drive well saved by Kepa Arrizabalaga.

And three minutes later following a wonderful left-sided byline cross by Ryan Bertrand, Danny Ings was left unattended four yards out, but somehow conspired to thrash his right-footed volley over the Chelsea crossbar.

Olivier Giroud thought he had a penalty when he went sprawling onto the turf but Wersley Hoedt, sliding challenge for the ball was deemed legal by referee Graig

Pawson and the ball went for another corner.

The pressure finally told on the Saints defence, on 31 minute and it was such a simple goal that belied much of the Blues previous sophisticated approach play.

Barkley won the ball in the Saints half, took a quick look up, and slotted the ball into the path of in-running Eden Hazard, who cooly rammed the ball past McCarthy - Hazard’s eighth goal of the season, seventh in the league.

There was no Chelsea change at half-time.

Willian he the first chance three minutes in, but his right-footed effort from just outside the Saints area, was well haled by McCarthy.

Chelsea, while in control of the ball are indomitable, but occasionally, when they get too complacent, they lose possession and that happened on 51 minutes which resulted in Bertrand flashing a volley over Kepa’ s crossbar.

The warning signs are there and a more clinical outfit would have made the Blues pay by now. Ings’s  shot two minutes later a consequence of complacency and the Blues had another let-off.

A free-kick 30- yards out saw, Giroud lose his marker and run free on the right of the wall. His powerful left-footed bicycle kick zipped across the Saints six-yard box and recalled England midfielder Barkley was on the spot to tap home from close range. It was the former Everton star’s first goal for their Blues.

Alvaro Morata entered the fray on 68 minutes, replacing Giroud. The ex-Arsenal and World Cup winner, punched the back of the chair in front of him in the dugout - suggesting he was less than pleased with the substitution.

Pedro was next up, Willian, naturally made way 15 minutes from time. A finger-tip save by Kepa who pushed the ball onto the crossbar denied Nathan Redmond’s blistering 35-yarder on 79 minutes.

Barkley was given a standing ovation from the Chelsea fans as he made way for Mateo Kovacic with 10 minutes left on the clock.

Ings tested Kepa again with a long-range effort, which the Spain stopper gleefully showed off a Hollywood save.