Chelsea went of a goal rampage as they hammered Yeovil Town 6-0 at Kingsmeadow this afternoon to retain top spot in the WSL Div 1.

A brace apiece by Crystal Dunn, Eni Aluko and Karen Carney kept the Blues ahead of Manchester City who defeated Birmingham 3-1.
This was a mismatch that could and should have reaped double figures for Emma Hayes’s side.
Should goal difference count at the end of the season, the Blues will look to this match against a side, yet to score in the league this season as an opportunity lost.
Chelsea has not conceded a goal in the league this term and there was never a chance of that record being breached.
Erin Cuthbert had a header after a minute, which was inches wide of the Yeovil goal, after excellent wing play by Crystal Dunn. 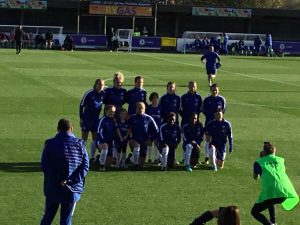 But it took just seven minutes for the Blues to open the scoring, Dunn tucked home smartly from close range after Cuthbert’s mazy wing play saw her cut the ball back perfectly from the byline.
Yeovil’s goalkeeper had to make a save from Dunn’s half-volley as the home side’s total dominance seemed ready to double the lead on 13 minutes.
But on 20 minutes, striker Eni Aluko, restored to the starting  line-up by boss Emma Hayes smashed home number two with a fierce right-footer.
Seconds later and the game was over as a contest as Karen Carney powered home with a firm header. Then Dunn smashed home her second of the afternoon.
There were no changes at half-time but the second half, restarted in the same vein as the first with Chelsea on the front foot.
Within as minute Dunn almost scored her hat-trick but her right-footer rebounded off the Yeovil crossbar at The Chemflow End.
Excellent interchange by Cuthbert and Aluko almost reaped dividends as the Blues cut the visitors apart - Walsh did well to thwart Cuthbert’s goal-bound shot.
When the inevitable fifth goal came it was a beauty. Carney picked the ball up 25 yards out and thumped a sensational right-footer that sizzled into the3 back of Walsh’s net. It was an unstoppable effort. 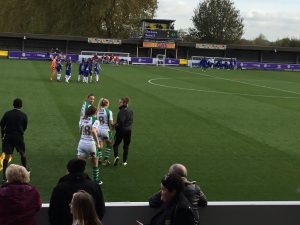 A Carney free-kick, on the right, on 69 minutes was met with a beautifully cushioned volley by Aluko who guided the ball out of the reach of a now despairing Walsh.
Chelsea simple took the foot off the pedal, broke whenever they wished and saw out the game without any resistance.