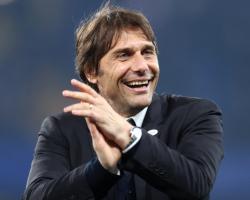 Champions Chelsea and skipper John Terry sign off in style

Chelsea celebrated lifting the Premier League trophy with a record 30th win as relegated Sunderland were dispatched with ease at Stamford Bridge.

The result ensured the Blues became the first side in a 38-game season to win 30 games.

And Antonio Conte will seek to end his first season as head coach with a double with victory in next Saturday's FA Cup final with Arsenal.

They came in celebration: to applaud the champions, to bid farewell to their 'captain, leader, legend' and to laud the man who had masterminded the rejuvenation.

Chelsea owner Roman Abramovich joined in as Conte was praised for presiding over the restoration of a team which finished 10th last season in defence of the title.

Terry handed over the captain's armband to Gary Cahill after a guard of honour which marked his first-half substitution and final Stamford Bridge appearance for Chelsea.

Cahill appears to be his successor as skipper and, alongside Conte, the Blues are in good hands.

Conte has intimated his intention to stay despite being coveted by Inter Milan and could be awarded a contract extension, 12 months into his three-year deal.

The former Juventus and Italy boss described this season as one of transition, but has expertly managed Terry's departure.

There could be further farewells

Striker Diego Costa and Hazard were substituted in the second half.

Costa, who was booked for catching John O'Shea with a flailing arm, waved with both his hands in what could be goodbye if recent speculation over a big-money move to the Chinese Super League materialises.

Hazard has been linked with a B#100million move to Real Madrid, but Chelsea will be desperate to keep him after another fine display.

This could be the end for David Moyes at Sunderland, too

It remains to be seen if the Scot is committed to trying to engineer a return from the Championship next season.

There was a celebratory air at Stamford Bridge, with complimentary prosecco and beer for home supporters.

Sunderland were also the opponents two seasons ago when Terry lifted the Premier League title under Jose Mourinho.

Terry played every minute of that campaign - a feat Cesar Azpilicueta has now emulated - but made just his sixth start of the season here.

It was his 717th appearance and 580th as captain and felt, initially, like a testimonial, as Conte reverted to his first-choice line-up, with the exception of Terry.

Sunderland made three changes following the loss at Arsenal, with Jack Rodwell and Adnan Januzaj and Joleon Lescott making his first start.

Jermain Defoe was absent owing to a hamstring injury ahead of his expected summer departure.

Chelsea appeared to be caught up in the festivities as Sunderland took a third-minute lead.

Sebastian Larsson's free-kick ricocheted off the wall to Manquillo, who was in space and blasted the ball into the roof of the net

Terry was the closest Chelsea player in attendance, but could do nothing about it.

Marcos Alonso curled a free-kick onto the angle of post and bar and Chelsea reclaimed possession.

The Blues played keep-ball in the area before working it right for Willian to blast in beyond Jordan Pickford.

Victor Moses' cross from the right was narrowly in front of Costa and just behind Hazard before Alonso stung the hands of Pickford from the edge of the area.

Willian then curled wide as he sought to earn a Wembley place.

There were some impressive sequences of play from Chelsea, who had Costa booked after 38 minutes.

The striker, tamed somewhat by Conte, tangled with O'Shea and caught the defender with his arm.

Hazard then turned the visitors' defence inside out before firing over.

Rodwell had a header parried by Courtois on the resumption, but then it was all Chelsea.

Moses' cross-cum-shot was just out of Luiz's reach before Willian's long ball found Costa, who played it to Hazard on his left.

Hazard twisted and turned, bamboozling Billy Jones, and fired in left-footed across goal.

A third came when Cesc Fabregas played the ball over the top, Lescott tried to intercept it but could only loop a header up over Pickford

Pedro won the foot race to nod it in.

Batshuayi added a fourth after being played in by Pedro and a fifth when he cut in from the left and fired into the far corner.

It meant Batshuayi, whose goal secured the title at West Brom, finished the season with four goals in three games.