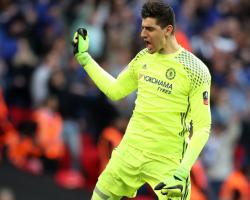 Typically in the final days of Terry's storied Chelsea career, the captain was the night's main protagonist as Watford suffered a fifth straight loss and the Blues won for a 14th time in 15 home games and celebrated amid blue and silver streamers.

Win against Sunderland on Sunday, when the Premier League trophy will be presented, and Chelsea will become the first club to record 30 victories in a 38-game season.

Terry made his 716th Chelsea appearance and likely his penultimate one at Stamford Bridge, scoring his 67th goal.

The 36-year-old defender will leave Chelsea this summer after 22 years and will also be expected to play on Sunday when he will lift a fifth championship title and 15th major honour.

A 16th will be sought in the May 27 FA Cup final with Arsenal, when Antonio Conte will bid to end his first season as head coach with the double.

Terry was named to start in the league for the first time since September 11 against Swansea and began a first game since the February 18 FA Cup win at Wolves.

There was an element of good fortune about his goal as the ball dropped kindly for Terry in the area, he struck it with his shin and it went in off the post.

Michy Batshuayi, who scored the title-clinching goal at West Brom, put Chelsea's 3-1 up, but Daryl Janmaat pulled a goal back with a superb strike.

Sebastian Prodl was sent off for a second bookable offence in the second minute of stoppage time as Watford finished the contest with 10 men in a bad tempered conclusion.