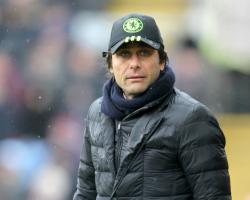 Chelsea moved 11 points clear at the top of the Premier League with a hard-fought 3-1 win over Swansea.

Cesc Fabregas scored on his 300th Premier League appearance, but Fernando Llorente equalised on the stroke of half-time.

With Manchester City not in action this weekend and Liverpool at Leicester on Monday, the Blues' advantage increased with 12 games to go.

Swansea's only defeats in six league games under former Chelsea assistant boss Paul Clement have come to Arsenal, City and now the Blues.

And the visitors might have felt aggrieved at being denied a second-half penalty when, with the score 1-1, the ball appeared to hit the arm of Cesar Azpilicueta.

Fabregas was selected ahead of Nemanja Matic for his first Premier League start of 2017 in the sole change to the starting XI from Chelsea's 1-1 draw at Burnley in their prior Premier League game.

Chelsea dominated the first half, with N'Golo Kante to the fore

The France midfielder has so often been likened to Claude Makelele, the former Chelsea midfielder who is now on Swansea's coaching staff.

Makelele would have admired how Kante broke up the visitors' play and showed again why he was so integral to Claudio Ranieri in Leicester's title win last season.

Kante is seeking a second successive title after his summer move to Stamford Bridge and Conte is willing to "risk" the sack following the departures of the last two title-winning bosses - his predecessor Jose Mourinho and Ranieri.

Fabregas may not be considered the ideal foil for Kante, but he was out to disprove that here.

The Spain playmaker almost set-up Pedro in the opening minute, his counterpart curling over from the edge of the area.

Eden Hazard and Pedro combined in the right channel

Pedro cut the ball back and Fabregas dug it out from his feet before poking in his 46th Premier League goal 19 minutes in.

Fabregas had another opportunity soon afterwards

He met a Victor Moses cross with a volley into the floor which Fabianski parried clear.

Pedro had another go

The striker, a target for Chelsea in January, powered in a header.

It meant Chelsea conceded for a fourth straight league game for the first time this season.

Hazard was denied by Fabianski as Chelsea resumed on the attack.

And next the Belgian ran to the byline and cut the ball back, with Fabregas' sweet strike hitting the bar.

Sigurdsson beat Moses and tried to get the ball under control.

A juggling ball appeared to hit Azpilicueta on the arm, but referee Neil Swarbrick dismissed appeals for a penalty.

Costa wanted a spot-kick at the other end, but Mawson and Federico Fernandez got the ball.

Swansea were behind for a second time when Pedro turned and unleashed a wickedly dipping shot from the edge of the area with 18 minutes left.

The ball went under Fabianski, who might have done better, but the torrential rain and wet surface made a save more difficult.

Thibaut Courtois saved a Sigurdsson free-kick, gathering the ball at the second attempt before Kante lifted a shot over at the other end.

Chelsea scored a third six minutes from time when Hazard ran to the byline and cut the ball back for Costa to volley in emphatically.