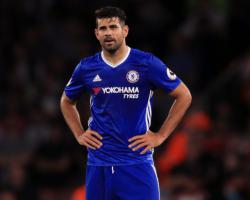 Diego Costa made a goalscoring return as Chelsea extended their lead at the top of the Premier League to eight points with a 2-0 win over Hull.

Costa celebrated his 52nd Chelsea goal on his 100th appearance by gesturing about all the noise which has surrounded him since missing the win at Leicester, officially due to a back injury.

A reported bust-up with Antonio Conte and his staff, as well as speculation over a move to the Chinese Super League, had little impact on Costa, whose 15th goal of the season was followed by a Gary Cahill header.

Conte said he was willing to "put my hands in the fire" for Costa, who was cheered at every opportunity

No-one in Chelsea blue was publicly questioning his loyalty.

And the faith was justified with a goal on a near-ideal weekend for Chelsea.

Hull's ninth straight away loss was marred by a head injury to Ryan Mason, who was carried off on a stretcher as oxygen was administered.

Such was the focus on Costa that little fuss was made about John Terry's absence from the matchday squad as the captain's place on the substitutes' bench went to Nathan Ake.

Asmir Begovic was also there as Chelsea consider a bid from Bournemouth for their back-up goalkeeper.

He sent the kick-off to David Luiz, who launched the ball forwards towards Pedro.

The ball dropped for Costa who sent a fizzing volley just wide.

Tom Huddlestone then shot narrowly wide on the break for Hull before a lengthy delay after Mason and Cahill clashed heads while challenging for an aerial ball in the Hull box.

Cahill was soon back on his feet and continued, but Mason was attended to before being taken by ambulance to hospital for further assessment.

Hull were proving difficult to break through, but showed signs of weakness.

Curtis Davies was booked for hauling down N'Golo Kante as Chelsea looked to counter.

And the Hull defender was perhaps fortunate to avoid a second yellow card for a foul on Pedro during the nine minutes of first-half stoppage time.

Costa had already had an effort ruled out for offside against Pedro before Chelsea finally penetrated the Hull defence.

Victor Moses darted down the right and Hazard left his cross for Costa to convert.

Costa celebrated not by kissing the Chelsea badge, but by making an apparent reference to the speculation surrounding his future.

Hull wanted a penalty soon after the restart and felt aggrieved when Marcos Alonso's challenge on Abel Hernandez went unpunished.

David Meyler was denied by Thibaut Courtois and Michael Dawson blocked from Costa, who was more often in action making headed clearances than threatening in the Hull half.

But Chelsea's perseverance paid off

Their advantage was doubled when Cahill headed in substitute Cesc Fabregas' free-kick.

Costa was denied a second as goalkeeper Eldin Jakupovic saved with his feet before the striker made way for Michy Batshuayi.

Conte gave him a warm embrace as he left the field, faith restored.