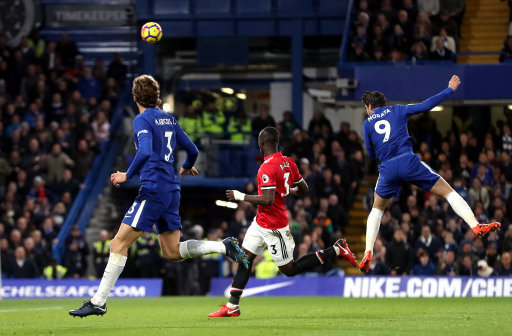 Alvaro Morata produced a header of exquisite beauty to down Manchester United 1-0 at Stamford Bridge tonight, in a pulsating match that eased the growing pressure on head coach Antonio Conte.
In a must-win match for the champions, Morata, rose unchallenged and met an inch-perfect cross from Cesar Azpilicueta. The ball zipped over the desperate diving hands of David de Gea and the ball nestled comfortably into the ball of his net.
This was a Chelsea side that was unrecognisable from the shamble of midweek, that saw the Blues lose a Champions League group match against Roma in Italy in such miserable fashion.
Conte demanded a respond and he got it in spades.
Manchester United, for their part made a fist of it, and when they got close to the Chelsea goal, had Thibaut Courtois in imperious form.
Conte dropped David Luiz, replacing him with Andrea Christensen, citing tactical reasons and he can sleep easy tonight, knowing his decision-making was right off the field and the players decision-making on the field was perfect too.The Blues thought they had scored on seven minutes, when a Marcos Alonso whipped in a great left footer from the left. The ball bounced off Phil Jones, under pressure from Alvaro Morata, and the ball smashed into the United net.
However referee Anthony Taylor instantly disallowed the effort, suggesting Morata had pushed the centre-back over. 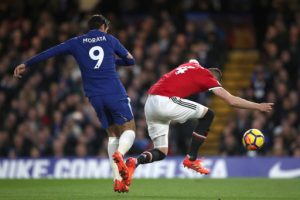 Manchester United’s Phil Jones (right) scores an own goal but it is disallowed as Chelsea’s Alvaro Morata is deemed to have fouled him during the Premier League match at Stamford Bridge, London.

Tiemoue Bakayoko had a simple chance to open the scoring five min urges later when first Cesc Fabregas set David Zappacosta a free open the right. The ball came across global but the Frenchman, lacking a bit of confident clipped the ball over David de Gea’s crossbar.
A Nemanja Matić inspired move almost saw the visitors take the lead on 15 minutes. But Romelu Lukaku zipped a left-footed daisy-cutter, on target from the edge of the Chelsea penalty area, but Thibaut Courtois did well to parry the ball away from danger.
Eden Hazard was next up to test de Gea and the Spain goalkeeper tipped away a venomous left-footer from the Belgium, Fabregas could only head the follow-up into the side netting.
There were not changes by either head coach at half-time.
A brilliant pass by Fabregas set up Hazard perfectly on 52 minutes, but the unmarked midfielder, rammed a left-footed volley straight into the mid rift of de Gea.
But seconds later an inch-perfect pass by Cesar Azpilicueta found Morata, unmarked, just inside the United penalty area, and the Spain striker headed the ball beyond the outstretched arms of de Gea and the ball plonked in to the back of hips net top put the league champions 1-0 up.
Jose Mourinho opted to make a double change, on 62 minutes bringing on Marouane Fellaini and Anthony Martial for Henrikh Mkhitaryan and Jones.
To counter this, Antonio Conte introduced Antonio Rudiger for Zappacosta on 66 minutes.
Bakayoko could have finished the match off but his effort from just outside the U it’s penalty area on 15 minutes was well wide of the mark. Hazard had another chance, exposing the porous visitors’ defence but his shot was well help be De Gea.
Danny Drinkwater replaced Fabregas, while Jesse Lingard replaced Young.
Willian entered the fray five minutes from time, replacing the tired Hazard.
United pushed for the equaliser with Chelsea forced back and on 89 minutes Fellaini had a wonderful chance but shot directly at Courtois.
United pushed the Blues back but stoic defending was required and produced as th Blues saw out the four minutes of added time successfully.