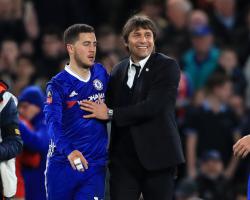 Crystal Palace stunned Chelsea with a 2-1 win to give the Blues' Premier League title rivals hope and their survival prospects a major boost.

Runaway leaders Chelsea had not conceded twice since losing 2-0 at Tottenham at January 4, but were breached twice in three minutes after taking a fifth-minute lead through Cesc Fabregas.

Wilfried Zaha and Christian Benteke gave the Eagles a 2-1 lead after 11 minutes and a brilliant team performance from Sam Allardyce's men earned a fourth straight win to improve their survival hopes.

The Blues - beaten for the first time at Stamford Bridge since September's loss to Liverpool and just a second time in 18 games under Conte - now lead second-placed Tottenham by seven points with nine games to go.

Still 21 points are needed to win the title, while rivals Manchester City visit on Wednesday.

Palace won 2-1 here last season - for the first time in 33 years - but these are different times from the dysfunctional days late in Jose Mourinho's reign.

Allardyce's Palace withstood wave after wave of Chelsea attacks and 11 minutes of stoppage time, with Hennessey continually called upon.

There was an element of good fortune for Palace as well as Andros Townsend was fortunate not to concede a penalty when Pedro's shot struck his arm after just 17 minutes.

When Eden Hazard, passed fit following a calf injury, turned Joel Ward twice and crossed for Fabregas to tuck in it appeared another home victory would be inevitable on the resumption following the international break.

Fabregas had run from deep and was unmarked, but next there was poor defending from the Blues.

Benteke found Zaha, who, with his back to goal, held off Cesar Azpilicueta and evaded Nemanja Matic

Palace's next goal was reminiscent of Chelsea

Benteke broke down the left and the ball broke for Zaha as David Luiz and N'Golo Kante tried to halt the striker.

Zaha played a return pass to the unmarked Benteke, who kept his composure as Thibaut Courtois faced him, lifting the ball neatly over his Belgium team-mate.

Three and a half sides of Stamford Bridge were stunned

A third smoke bomb came from the visiting fans.

Chelsea were frustrated when Pedro's goalbound shot hit Townsend's arm and no penalty was given.

The leaders piled on the pressure

He then saved from Hazard and soon afterwards from Matic, who also had a header tipped over.

Allardyce's eagerness for his players to stick to their brief - as they had done so well - was apparent when he rebuked Luka Milivojovic for chopping down Hazard near the halfway line.

Chelsea continued to pour forward - but Palace maintained their high intensity and discipline.

That was despite defensive reorganisation being needed

Scott Dann had to be replaced by Damien Delaney, 15 minutes after coming on as a half-time replacement for James Tomkins.

Dann appeared to be caught accidentally by Costa after blocking the striker's shot.

Martin Kelly also came on, with Townsend sacrificed, while Matic made way for Willian as Chelsea switched to 3-4-3.

Courtois used an outstretched left leg to save from Zaha and a Yohan Cabaye free-kick curled just wide of the far post.

Costa headed wide from Hazard's cross as Chelsea again spurned an opportunity before Zaha was fouled by Cahill as he broke.

Hennessey saved from Fabregas and try as they might Chelsea could not breach the Palace rearguard.