Chelsea produced a stunning away performance to destroy Burnley 4-0  at Turf Moor this afternoon, as Alvaro Morata, Willian, Ross Barkley and Ruben Loftu-Cheek scored the goals that propelled the Londoners to second place in the Premier League to maintain their unbeaten start to their campaign.

Maurizio Sarri had to make do without talisman Eden Hazard who had struggled all week with a back injury.

Could the Blues win without him - yes they could and with something to spare.

The early pace and tempo came from the home side as the Blues, players in yellow struggled.

But the first chance fell to the visitors on 13 minutes. Willian knocked the ball back to Ross Barkley who arrowed a firm, left-footer into the ground from just outside the Burnley penalty area. The ball clipped off Alvaro Morata’s head and Joe Hart made a fine finger-tip save to turn the ball over his crossbar.

Kepa Arrizabalaga should have done better when challenged by San Vokes, and the ball fell to Robbie Brady. But the wide man’s low drive zipped across the Chelsea goal and away for a corner. 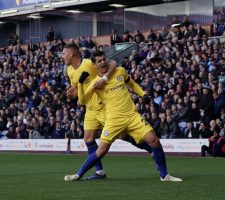 A minute later, on 16 minutes, Hart was in action again, this time thwarting Willian’s right footer.

Willian was even more unlucky on 21 minutes, when an inch-perfect through ball by Morata sent the Brazilian clear. He produced a clever, side-footer that pinged off Hart’s left post,

But a wonderful tap-on by Barkley a minute later fed Morata who, first time, tucked the ball home from close-range, past Hart to put the Londoners 1-0 up.

On 29 minutes, Pedro exited the pitch, seemingly clutching his stomach, he was replaced by Ruben Loftus-Cheek.

Another fine counter-attack by Chelsea, on 38 minutes, should have seen them double the lead. But this time Morata, with an easier chance, screwed his close-range  shot wide of the home’s side’s goal.

The Spain forward should have walked off the pitch at half-time with three goals under his belt , as he brilliantly controlled a Jorginho pass, took one touch - but his shot, was well blocked by Hart.

Instead, two minutes before the whistle, the forward was booked by Craig Pawson for a strong reaction to a legitimate James Tarkowski tackle.

Willian quickly followed Morata in the book for falling over to a non-challenge from Matthew Lowton.

There were no changes by either side at half-time.

Morata had the first chance after the restart - but his header was just wide.

Thankfully for Chelsea, Barkley is on the pitch and the England midfielder did not disappoint the Chelsea fans. Receiving the ball from N’Golo Kante, Barkley powered forward and unleashed a vicious left-footed daisy-cutter from 20 yards out that flashed cross Hart and into the side-netting to double the score on 57 minutes. That’s three goals and three assists in his last three Premier League games.

It was game over on 62 minutes when Willian smashed a venomous, curling right-footer from the edge of Burnley’s penalty area as the visitors threatened to go on a goal rampage.

Substitute Olivier Giroud, who just can’t buy a goal, was inches wide when a half-volley left-footer from the edge of the Burnley penalty area zipped past Hart’s goal.

A stunning save by Hart denied Giroud deep into added time, tipping a powerful header onto his crossbar.

But it was Ruben Loftus-Cheek, who ended a fine week after his midweek Europa League hat-trick to slot home the fourth from close range to complete the rout