​Chelsea get their 2019/20 campaign underway with a trip to Old Trafford to face Manchester United on Sunday, starting what promises to be an intriguing season for the Blues.

Club icon Frank Lampard is now at the helm, but he has faced plenty of criticism for his perceived lack of experience. Is he the man to help Chelsea through the post-Eden Hazard era?

Here's everything you need to know about Chelsea ahead of the new season. Last season was good, then bad, then alright and then good again. Maurizio Sarri's ​Chelsea were the epitome of inconsistency, but still played some incredible football en-route to securing a top-four finish in the league.​

They proved they could hang with some of Europe's top sides, but still looked well behind the likes of ​Liverpool and ​Manchester City, and the 6-0 mauling at the hands of the Citizens certainly won't be forgotten any time soon.

Serious injuries to both Callum Hudson-Odoi and ​Ruben Loftus-Cheek marred the end of the season and look to have spoiled the start of the new campaign, although lifting the Europa League with a comprehensive 4-1 win over rivals ​Arsenal ensured the season ended on a high. Just like last season, this summer was a bit all over the place. The Blues drew 1-1 with Irish side Bohemians in Lampard's first match, before thumping St. Patrick's Athletic 4-0 just days later.

An underwhelming 1-0 defeat to Kawasaki Frontale followed, but that's when the fun started. Chelsea were impressive as they picked up a 2-1 win over ​Barcelona, before 4-3 and 5-3 victories over ​Reading and RB Salzburg respectively showcased both the good and the bad sides of the Blues.

They ended the summer with a 2-2 draw with Borussia Monchengladbach, but Lampard will be happy with what he saw from his side. At times, they moved the ball impeccably and scored a number of exciting goals, and they are not even at full strength yet. Well, this is awkward...

The Blues' transfer ban has kept signings to a minimum, but they did complete a permanent deal for ​Mateo Kovacic, so it's not all bad.

However, their squad has been bolstered with the return of a number of loanees. Tammy Abraham, Mason Mount, Kurt Zouma and Christian Pulisic are just four of those vying for a place in the new-look Chelsea side. 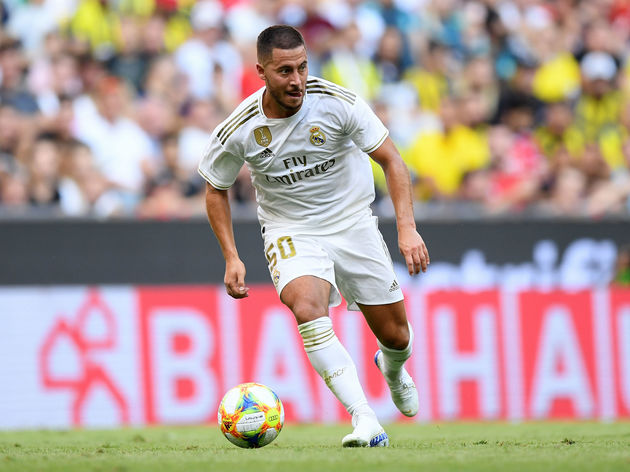 Can Chelsea cope without ​Hazard? The Belgian superstar completed a huge move to ​Real Madrid this summer, and the Blues can't even replace him. Ouch. He was so influential last year, and Lampard needs to find a way to survive without him.

Captain ​Gary Cahill has also left the club following the expiry of his contract, whilst ​Gonzalo Higuain's loan move from ​Juventus was (thankfully) not extended beyond the summer.

A number of fringe players could still depart, but don't expect too much movement from the Blues are they prepare themselves for a year under the transfer ban. There are doubts all over this Chelsea squad, but there a number of positions in which they look to be well prepared.

Firstly, in goal, Kepa Arrizabalaga went from strength to strength last season and has quickly endeared himself to the Stamford Bridge faithful with a number of stunning performances. He might be busy this season, but he looks up to the task.

Central midfield is arguably the Blues' strongest position. Jorginho, Kovacic, ​N'Golo Kante, Mason Mount, ​Ross Barkley and Loftus-Cheek all stand to feature heavily, and many of these players have looked electric in pre-season. ​ Defence is a cause for concern for Chelsea fans. ​Cesar Azpilicueta looks to be on the decline, while both ​Marcos Alonso and Emerson have attracted plenty of criticism. In the centre, the Blues do have ​David Luiz, Andreas Christensen, Kurt Zouma and ​Antonio Rudiger, although which two will make up Lampard's preferred pairing is anyone's guess.

On the wing, many fans don't feel as though ​Willian and ​Pedro can shoulder the responsibility next season. Christian Pulisic is yet to experience life in the ​Premier League, whilst supporters would be wise not to increase the pressure on 18-year-old Callum Hudson-Odoi as he recovers from his serious Achilles injury.

Finally, let's talk about strikers. Tammy Abraham was prolific in the ​Championship but is yet to convince in the top flight, whilst neither ​Michy Batshuayi nor ​Olivier Giroud boast the goalscoring record to alleviate fans' concerns. You get the feeling that Chelsea's forwards could either score goals for fun, or manage a combined five strikes between them.  ​ Now there's a question - who will be Chelsea's key man? There doesn't seem to be a clear answer, but there are a number of players who could certainly assume the role next season.

Kepa will need to be as strong as ever in goal, whilst David Luiz's creativity from defence will be huge. However, expect Chelsea's central midfielders to dictate proceedings. Kante can defend, Jorginho and Kovacic can create, and Barkley and Mount can score.

Pulisic has shown glimpses of his exciting potential during pre-season, and fans will want plenty of goals and assists from the young American. If he can provide, then Chelsea will be just fine.

Potential Breakout:​ The Blues have a number of exciting youngsters in the first team, but one who is yet to taste senior action in Reece James. The right-back enjoyed a stunning campaign in the Championship with ​Wigan Athletic, and could quickly become Chelsea's first choice once he recovers from an ankle injury. Predicting what will happen to this Chelsea side is hard. They are beginning a difficult transitional period which will see them take chances on young players and even a young manager, most of whom are unknown quantities​ in the Premier League.

Nevertheless, there is real class throughout the team. A top-six finish is a must, but securing ​Champions League football next season will certainly be their top priority. It's all about weathering the storm and finding out what tools they are working with.

Don't expect them to be competing for the title, but they shouldn't be too far out of the picture.