8 of the Biggest Bromances of All Time

Footballers often form close relationships with one another, but there are some examples of when that bond grows even stronger.​

These 'bromances' make football much more than just a game. Players become inseparable, and life becomes a better place with your best friend around.

Here are eight of the greatest bromances we have ever seen. This one should come as no surprise to anyone who uses social media. ​Tottenham Hotspur duo ​Dele Alli and ​Eric Dier are all over each other on Twitter, always trying to tease and embarrass each other, and we love it.

The vibe is always the same at Spurs' training ground, where the pair refuse to take life too seriously and instead focus on the good times. After a challenging start to life with ​Newcastle United, a young ​Andy Carroll went to live with club captain Kevin Nolan​, who helped transform him into a responsible, mature member of society. He learned how to cook, and how someone in his position needed to act.

Despite their age difference, the pair proved to be inseparable. They spent several years showcasing their bromance at St James' Park, before linking up again with ​West Ham United.

Carroll once named Nolan as one of his favourite teammates of all time, and he has regularly stayed in contact with the veteran midfielder to wish him well on his new positions. Spending 13 years playing alongside someone would obviously help a bromance to blossom, but the relationship between ​Chelsea legends John Terry and Frank Lampard was much more than that.

The pair rarely hesitate to praise each other online, with one describing the other as the greatest of all time. Through thick and thin, Lampard and Terry have always been there for each other, even when their professional careers have taken them in different directions.

They dream of sitting in the dugout at Stamford Bridge together, and fans of the Blues would do anything to see that happen one day.​ After years as teammates at ​Atletico Madrid, Diego Simeone and German Burgos linked up once again in Argentina, but this time as a management duo. Simeone wanted the man known as 'Mono' to come with him on his journey in the dugout, and it's worked out pretty well for both.

The two share similar fiery personalities, and they always have the each other's back on the touchline. They moved to Ajax as teenagers in 2001, and Ibrahimovic decided to reach out to his new teammate as he did not have any friends in Amsterdam, and the rest is history. They played together at Ajax, ​Inter, ​Barcelona and Paris Saint-Germain, winning countless trophies together.

It has often been claimed that Maxwell was signed by these clubs purely to keep Ibrahimovic happy but, with all the trophies in their cabinets, you can bet neither would have wanted their careers to go any other way.​ When Jose Mourinho first moved to Chelsea in 2004, he was given a blank cheque by owner Roman Abramovich to sign literally any striker he wanted. The man he chose? A relatively unknown 26-year-old called Didier Drogba.

Many couldn't believe it, but Mourinho knew what he was getting with Drogba. The Ivorian turned into one of the greatest to ever wear Chelsea blue, and has made no secret of the fact that he owes his career to the legendary boss.

He returned to Chelsea in 2014 to link up with Mourinho again, as the Portuguese tactician was desperate to use Drogba's influence to help him win trophies with the Blues one last time. It's safe to say, they did it.​ As two of Roma's most iconic players, it's no surprise that Francesco Totti and Daniele De Rossi struck up a strong relationship.

There were tears from both when Totti hung up his boots, and De Rossi confessed that playing alongside his fellow Italian was one of the greatest honours he could ever imagine.

The pair could even look to reignite their bromance behind the scenes at Roma, with Totti said to want De Rossi as part of his backroom staff if he becomes the new technical director. 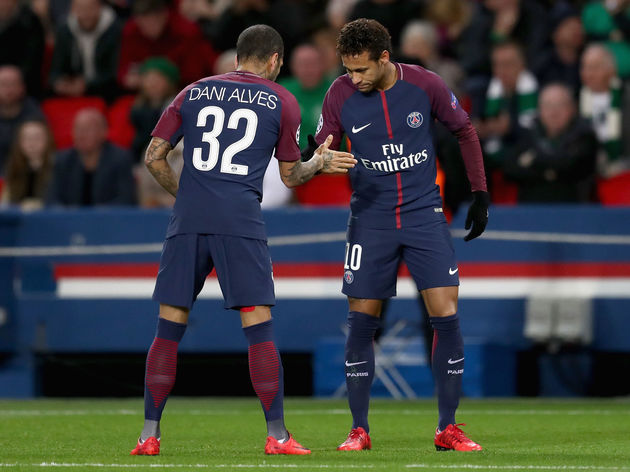 ​Neymar grew up watching right-back ​Dani Alves tear it up for Barcelona and Brazil, and finally got the chance to work with the legendary defender in 2013.

He has referred to Alves as his brother, and even credited him as the man who turned his dreams into a reality. The pair even linked up at Paris Saint-Germain in 2017, where the veteran Alves has acted like a mentor to Neymar, both on and off the field.

The world's most expensive player has made sure everyone knows of his love for Alves, even demanding that PSG offer him a better contract to make sure Alves remains at the club. Now that's friendship for you.​

This article was brought to you by Pokemon Detective Pikachu, in cinemas soon. Check out the trailer below: