Chelsea’s Ruben Loftus-Cheek was the star of England’s creditable 0-0 draw tonight at Wembley against World Cup champions Germany and was rightly judged to be the man-of-the-match.

The 21-year-old midfielder played the full 90 minutes and his performance showed skill, power and a positive attitude that should put the youngster firmly on the map for next summer’s World Cup in Russia.
Loftus-Cheek, currently on loan at Crystal Palace was joined by fellow Stamford Bridge kid Tammy Abraham. The tall striker proved that he too can be confident of a slot in Gareth Southgate’s final squad. 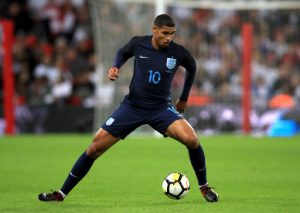 during the International Friendly match at Wembley Stadium, London.[/caption]

Also on the pitch was Antonio Rudiger for Germany. And the rugged centre-back impressed with his aggressiveness, while excellent-Chelsea youngster Jack Cork, who did not make a first team start for the Blues came in for the final five minutes.
Tammy Abraham had a great chance in the opening two minutes, when he was inches away from latching on to a byline cross from Jamie Vardy, but the Chelsea star, on loan at Swansea failed to connect with the ball from close range.
Leroy Sane had a great chance on eight minutes but he slashed his right-footer into Jordan Pickford’s right side-netting.l
Sane found himself free on the edge of the England penalty area on 20 minutes and let fly with a viscous zipper of a kleptomaniac-foot which stung Pickford ‘as crossbar before landing, on the right side of the goal line for England. Neither goalline technology or the VAR system was needed.
Germany cut the Three Lions apart two minutes later but Pickford and Phil Jones denied the visitors a certain goal.
Jones injured himself in the defence of his goal and was quickly replaced by Joe Gomez. 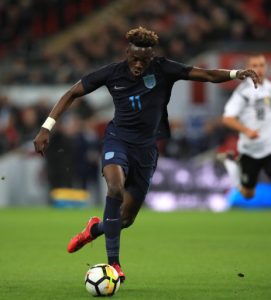 Pickford was once again England’s saviour seven minutes before the break denying Germany with a point blank save from Timo Werner after Spurs’ Danny Rose played the winger onside.
Abraham saw his shot spin away from Marc-Andre Ter Stegen’s right post as the striker’s shoot clipped off Mats Hummels, and wickedly changing the direction of the ball.
There were no changes by either side at half-time.
Vardy should have score three minutes after the restart when, unmarked he met Trippiers’s cross with a downward header. Ter Stegen was equal to the task and hooked the goal-bound effort away to safety.
Abraham was replaced on 60-minutes, to be replaced by Marcus Rashford.
With a slew of substations that followed. Inevitably, the flow of the game was disrupted.
It tended to affect England more as the World champions took command of the majority of the possession.
However a draw was inevitable and the players eked out the final minutes - a draw the obvious conclusion.