What Chelsea Fans Can Expect From Ajax Star Hakim Ziyech

After not making a single signing in January, Chelsea looked poised to complete a move for Ajax forward Hakim Ziyech.

The Blues are understood to have reached an agreement over the transfer, with the 26-year-old set to arrive at Stamford Bridge in the summer.

Ziyech burst into mainstream footballing consciousness as part of the Ajax side that came within seconds of reaching the ​Champions League final last season.

Chelsea already boast an impressive attacking contingent, so what is it about Ziyech that has convinced Frank Lampard to splash the cash?

90min took a closer look at the forward to find out...

How Creative Is Ziyech? During his side's dramatic 4-4 Champions League draw with Chelsea he set up three goals and his performance that day appears to have sufficiently impressed Lampard.

The forward's first assist was the pick of the bunch, a deep, inch-perfect cross which picked out Quincy Promes' run perfectly. His second was sumptuous as well. Ziyech whipped in a devilish free kick from near the byline which bounced back off the post and into Kepa Arrizabalaga's face before dropping into the Chelsea net.

He then rounded off the passing exhibition with a drilled pass to Donny van de Beek who provided the finish.

That was just one game but Ziyech has been pulling out performances such as these for years. He currently leads the Eredivisie in key passes and crosses per 90 minutes, metrics that he also dominated during the 2017/2018 and 2018/2019 seasons.

How Good Is Ziyech in Front of Goal? ​Ziyech's scoring history is not quite as impressive as his assist record.

While at Ajax, he has managed just under a goal every three games, registering 48 from 159 appearances in all competitions.

The 2015/2016 represented the best scoring campaign of the Moroccan's career thus far as he hit 17 league goals for FC Twente. Last season he managed 16 goals but these two campaigns aside, he has generally registered around 10 goals each year.

Since 2017/18, Hakim Ziyech has been directly involved in a shot once every 10 minutes in league and European competition:

It is still a fairly impressive record, but replicating these numbers in the Premier League seems unlikely. Ziyech has averaged nearly five shots in each of his 18 league games this season and has returned just six goals.

Despite his wastefulness, this volume of shots is always likely to produce some special moments. One such moment came against Valencia back in October when Ziyech cut in onto his left foot before curling an unstoppable shot into the top corner.

Is magic like this worth enduring the flurry of missed opportunities that come before them? 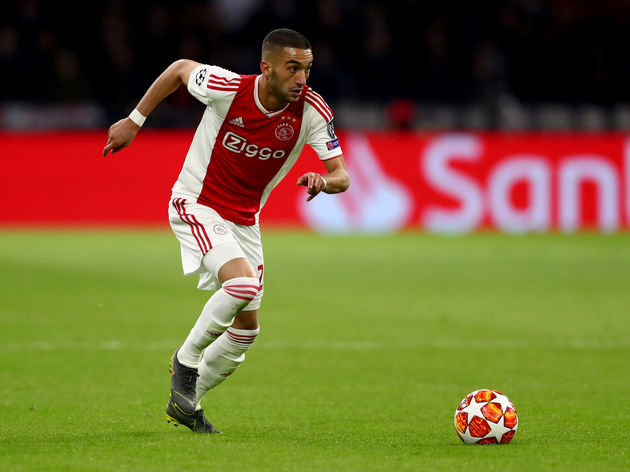 Though his principal attributes are centred around the mental side of the game - vision, movement and tactical intelligence - Ziyech is also capable of some old-fashioned wing play.

The forward favours cutting onto his left foot and when opponents are anticipating it, he has the ability to power past his marker.

I’m very excited by the prospect of watching Ziyech every week at Chelsea. As he underlined at Stamford Bridge earlier this season, his left foot is pure, unadulterated sauce #CFC

As you have possibly gleaned from the evidence above, it is hard to put a case forward for Ziyech not being a good player.

He is full of flair and creativity and is capable of producing some incredible sequences of play. But...there is a difference between being a great player and being a great signing.

Do Chelsea really need another attacking options right now. Callum Hudson Odoi has just been given a new long term deal, big money signing Christian Pulisic​ has only just arrived and Willian has proved that he remains a more than adequate Premier League player this season. Despite all of this, Ziyech is too good of a talent to turn down. His arrival will likely spell the end for one or two of the Blues other offensive options, but it is a risk worth taking. The rewards of getting the forward firing on all cylinders for years to come is too big a chance to ignore.