Calling all Chelsea FC fans. Get down to Sutton United FC’s ground on Saturday, June 9 where you can see Chelsea’s famous legends side take on their Glasgow Rangers counterparts.

Following the death of footballing legend Ray Wilkins, the players of The Chelsea and Glasgow Rangers have asked that the trophy be renamed The Ray Wilkins Memorial trophy in memory of Butch who stared for both sides in a stellar footballing career. 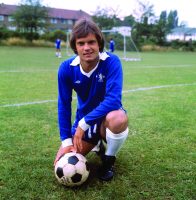 Chelsea played Glasgow Rangers last year at Sutton United FC and Ray Wilkins was the manager, along with Ray Lewington.

Ray’s sudden passing away has shocked the footballing world, his family and friends. He was looking forward to playing Rangers again as he had great memories when he was in Glasgow.

Money raised will be donated top St George’s Hospital in Tooting where sadly passed away.

There will be a full house at Gander Green lane, so go get your tickets now.

Kick off is 3pm, doors open at noon.

For tickets, go to https://www.musicglue.com/rangers-legends-v-chelsea-legends