Therefore, Reece James scoring in the 74th minute to make him Chelsea’s youngest ever goalscorer in the Champions League was just a fraction of the madness that took place at Stamford Bridge.

However, it did highlight an important prospect for the Blues - James is more than capable of becoming a regular in Frank Lampard’s starting XI this season. And with Marcos Alonso in a bad spell of form and captain Cesar Azpilicueta no longer at his best, there are options for more of the youngsters to make it into Chelsea’s backline. When Lampard made his decision to take off Alonso at half time and replace him with the 19-year-old, it was a bold statement and, in some ways, a risky decision from the ex-Chelsea star.

It was of course justified, considering Alonso's horrendous performance on the pitch, but bringing on a younger, far less experienced substitute in a vital Champions League fixture when his team was already two goals down was a courageous move.

However, it proved to be another excellent decision from the young manager - whose in-game management and use of substitutes have been impressive this season - and James netted the Blues’ fourth goal to gain them a much-needed point in the 4-4 draw.

From the offset, James was superb and initially made a difference in a ​Chelsea team that was struggling at the back. After ​Alonso came off, ​Azpilicueta switched to left back as James took over on the right. He made crucial tackles and was able to help the team offensively whilst still proving his worth in defence. To put it lightly, as soon as James came on, the panic Chelsea had displayed when Ajax pressed in the final third evaporated. For a man who shows this type of confidence at only 19 years of age, the possibilities are endless.

However, we shouldn't brush over Chelsea's defensive problems too quickly.

One consistent issue for Chelsea throughout the season has been their shocking inability to defend set pieces, and their inability to keep clean sheets in general. Whether that be the defenders’ problem, Kepa Arrizabalaga’s responsibility or perhaps a bit of both, something needs to be done.

It’s also no secret that Alonso’s recent performances just haven't been good enough. The Spaniard, who has already cost Chelsea a handful of games this season, was sidelined for Emerson Palmieri at the start of the campaign.

However, after the left back picked up an injury on international duty, Alonso found his way back into the squad. He initially started well - providing two assists and scoring the winner against Newcastle - but he hasn't maintained a level of consistency and was soon back to being the unreliable and irresponsible player Chelsea fans know too well. But Lampard came up with an effective solution to this problem by introducing James on Tuesday night and switching Azpilicueta to left-back.

However, the captain has been having a few defensive problems himself.

A man who has rightfully earned his status as a Chelsea legend, having spent seven years with the club, just isn’t the same as when he first started at the Blues. And if Emerson returns from injury soon, it won't be long before we see a youthful backline of James and Fikayo Tomori, joined by the likes of Kurt Zouma and Emerson.

However, Tuesday night wasn't the only time James has shown his magic. Although only recently making his mark within the Chelsea squad, James has already proven his worth as a great player.

The full back had an incredible loan spell with Wigan last term, being named in the EFL Championship Team of the Year as well as winning the club's player of the year and the players’ player of the year awards. He even secured the goal of the season award with a wonder strike, emphasising his ability to score great goals too. 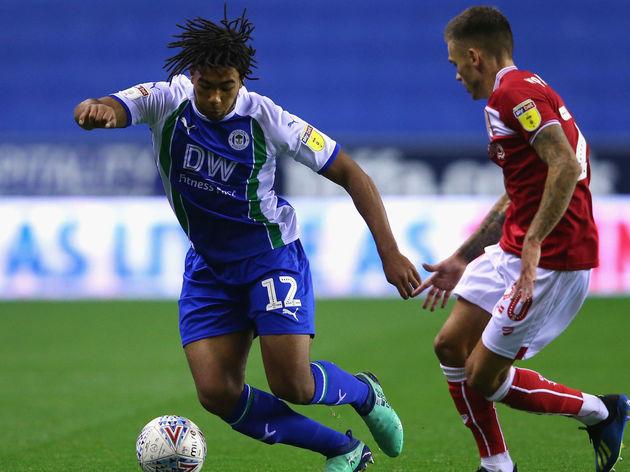 When you look at his career so far, it’s hardly a surprise to see how well he fits into the Chelsea squad. For the Blues, he has only managed two starts – both coming in the Carabao Cup, where he managed a goal and an assist in Chelsea’s 7-1 thrashing of Grimsby back in September.

But after Tuesday night, Lampard may have to reconsider his starting XI to face Crystal Palace on Saturday.

Chelsea have achieved so much with the youth this season. With the likes of Tammy Abraham, Mason Mount, Tomori and Christian Pulisic all contributing to the first team’s surprising success, there’s no reason why James can’t too.