​Chelsea picked up their first three points of the season thanks to a hard-fought 3-2 win over Norwich, being pegged back twice before Tammy Abraham fired Frank Lampard to his first-ever win as a Premier League manager.

It took the visitors less than three minutes to break the deadlock at Carrow Road, with Abraham left unmarked in the penalty area to fire a low shot past Tim Krul, b If there's one thing we've learned from Norwich's opening three games it's that if they do indeed stay in the Premier League, they're going to do so playing their way.

Another defensive display from the Canaries which would leave visibly nauseous, Daniel Farke's side were spared by a combination of pretty tame attacking play from Chelsea, as well as a certain Finland international at the other end of the pitch. STAR PLAYER - Was it ever going to be anyone else?

10 - Teemu Pukki is the 10th player to have scored in each of his first three @premierleague appearances, while only Pavel Pogrebnyak also scored as many as five in his first three in the competition. Command. #NORCHE

5 goals in 2.5 games for Teemu Pukki. That’s not a bad start to his Premier League career. 

More goals for Pukki vs Top 6 than Lukaku btw

Teemu Pukki's fifth goal in the Premier League already has seen him move top of the goalscoring charts for the time being, but the Finland international's ability in front of goal is arguably just his second-best attribute.

Proficiency in the box can often ebb and flow depending on form, but Pukki has shown his movement is up there with some of European football's household names, constantly staying on the last shoulder of the defender and getting himself in goalscoring positions.

Once again, Frank Lampard's side had spells in the match that showed how they could retain their place in the top six this season, with smart movement and passing routines causing Norwich a lot of problems in the final third.

Also once again, however, Chelsea's bright moments were too few and far between, often lacking any real cutting edge while also being undone by problems at the other end of the pitch. 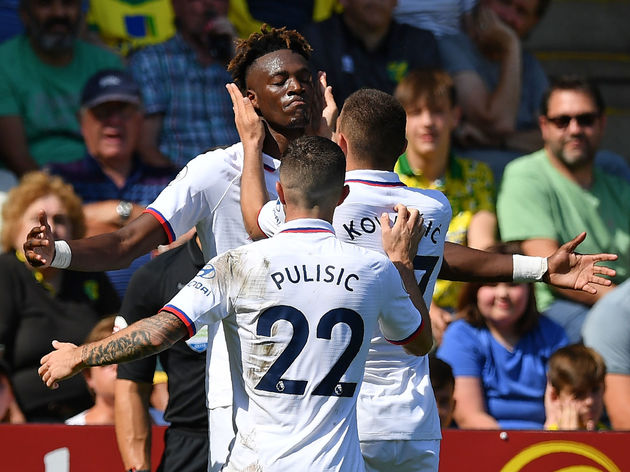 Some individual quality proved to be the difference come full-time to grant Chelsea their first win of the season, but fans will be desperate to start winning games with at least a modicum of control over the next few weeks.

STAR PLAYER - Tammy Abraham might have been the match-winner on Saturday, but where would Chelsea be without Mason Mount?

Mason Mount is just a footballer.

Mount and Abraham with the early goals. Great to see youth finally getting its chance at @ChelseaFC. Hopefully this ambitious approach will get the patience it deserves.

Mason Mount is going to be a monster. What a goal.

The 20-year-old is the heartbeat of Frank Lampard's side and he provided the spark for almost everything good at Carrow Road, just like he was in their first two games against Manchester United and Leicester City.

He took his goal like a seasoned pro in a frantic first half of football in Norfolk, but it was his intelligence off the ball which has really helped earmark him as one for the future, as well as giving him a fast-track ticket to the first-team in west London.

Norwich have a Carabao Cup second-round match on the road to Crawley before they return to Premier League action next week, where they'll face an out-of-form West Ham at London Stadium. Chelsea, meanwhile, are straight back to league football and will be hoping to string some form together when they welcome Sheffield United to Stamford Bridge.