​Maurizio Sarri has insisted that the recent situation involving goalkeeper Kepa Arrizabalaga can help his side to grow, whilst also admitting that Chelsea's challenge for a spot in the top four could go down to the wire.

The Blues have won three consecutive games since their dramatic defeat to Manchester City in the Carabao Cup final, a game which was overshadowed by Kepa's refusal to be substituted and replaced by Willy Caballero ahead of the penalty shootout.

Losing to penalties to Man City and having Kepa refuse to come off was... good for Chelsea? 樂

​City went on to defeat the west Londoners with the Spaniard between the posts for ​Chelsea but, via ​Goal, Sarri said: "As you know, for me, it was really very important the performance against Manchester City.

"Two weeks before that match we lost 6-0 in Manchester. A fortnight later, the players were able to play at the same level as them, so that was important for our confidence.

"In the end, the Kepa situation was a good thing for our group too. In the last five matches, we won four matches and drew against Manchester City. In five matches, we conceded only one goal. So we are improving in consistency.

Chelsea's recent upturn in form has seen Sarri's side regain a foothold in the race for the top four, with the Blues just two points behind fourth placed ​Manchester United with a game in hand ahead of Sunday's clash with ​Wolves.

United's clash with ​Arsenal offers a chance for the Blues to gain further ground, with at least one of their rivals for the Champions League spots set to drop points, and Sarri admitted via the ​Telegraph: "We have two big opportunities. 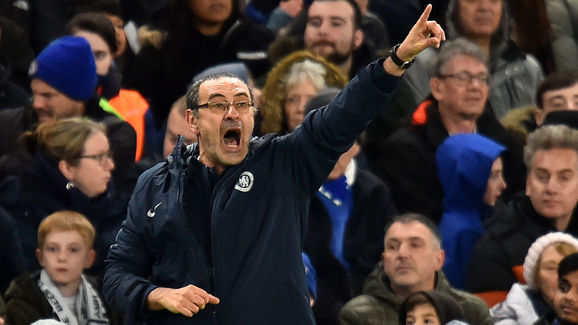 "This match [against Wolves], and when we play the match against ​Brighton. But I think we are fighting and we will be fighting for the top four until the last minute of the last match. Every match will be important in our future."

Chelsea slipped to one of their worst defeats of the season last time out against Wolves as Nuno Espirito Santo's side claimed a shock 2-1 victory over the Blues at Molineux in December, and Sarri said of the previous encounter with Sunday's opponents: "I want to watch it again.

"It's not a long time ago, but we have played 35 matches in the time since. All the staff will study these opponents. I remember very well that, after the goal at 1-1, we stopped playing. We were in trouble and stopped completely to play. We only started again in the last ten minutes.

"I need to study that match very well.  We need to arrive in this match with the right level of preparation and mentality."