Chelsea will be in the Champions League in 2019/20 no matter what, but the prospect of winning the Europa League for a second time in seven seasons is still an important objective.

Final game at the Bridge this season...

"We've reached the club's target so we're very happy with that. Now we have to play in another competition so our next target is to reach the final and then to win the final because our feeling is we deserve a trophy," Sarri said at his pre-match press conference, via ChelseaFC.com.

"It's an important match and we have to play to win."

With the aggregate score tied at 1-1 Chelsea hold the narrowest of advantages after the first leg, with Pedro's away goal in Germany last week enough to send the English side through to the final in Baku later this month if no more goals are scored. 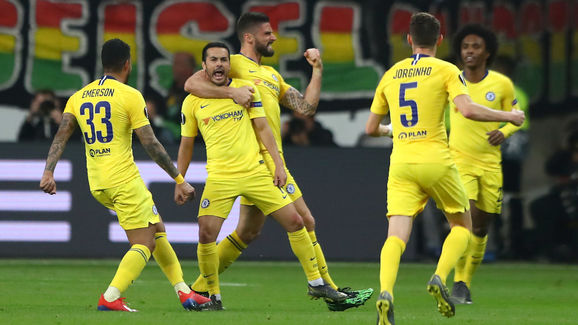 But Sarri has resisted calling his team favourites to win, describing Frankfurt as 'dynamic, aggressive and dangerous' and noting the quality of forward Luka Jovic and Ante Rebic.

"In a semi-final, you always have to play against a strong team with strong players so it's difficult to say we are favourites. They have two good strikers in Jovic and Rebic so we have to be careful," he said.

N'Golo Kante has been ruled out of the game with a hamstring injury suffered during last weekend's Premier League clash with Watford. Sarri has explained that the French World Cup winner needs 'a couple of weeks' to rest in order to recover. That will mean his season is already over unless Chelsea reach the Europa League final.