​Maurizio Sarri has hinted that Eden Hazard's head may already be away from Chelsea with the Belgian likely to miss Sunday's Premier League clash with Leicester.

Transfer speculation linking the Belgian with a move to Real Madrid in the summer has intensified in recent weeks, with a potential switch to the Bernabeu at the end of the season now appearing more inevitable.

Eden Hazard’s superb solo goal against Liverpool is our 2018/19 Goal of the Season!

​Chelsea have sealed qualification for next season's Champions League with a top four finish and the Blues have also reached the Europa League final, but ​Hazard is still widely expected to seek a move away from Stamford Bridge.

The 28-year-old is reportedly on the verge of agreeing personal terms on a £100m switch to ​Madrid and, as quoted by ​The Sun, Sarri said of the forward's future: "I don't know. If Hazard is thinking the history here is finished then in his mind it is finished.

"I can try to speak to him but it's not easy because of course I want Hazard, but I want Hazard with a very high level of motivation. 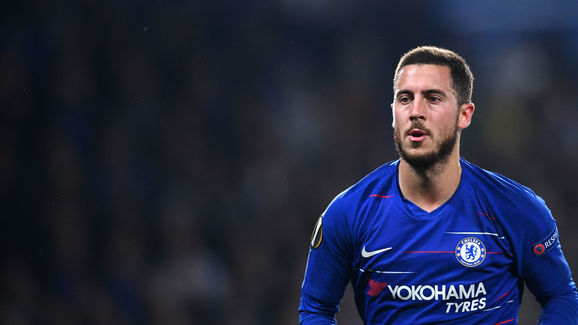 "You have to ask the club because I am not in control of the market and I am not in charge of the renewal of the contract so I am not able to answer.

"I can only speak to the player but like a father, not like a manager. If I speak to him, I will not tell you anything because it's a discussion between a father and a son."

Hazard is apparently set to start on the bench for Chelsea's clash with ​Leicester at the King Power Stadium on Sunday, with the Blues' Europa League final clash with ​Arsenal looming large on the horizon at the end of May.