Joe Cole: Remembering 7 of His Best & Worst Moments 16 Years After He Joined Chelsea

Joe Cole was an enigma. On his day, he was one of the best in the world. On his worst, otherwise known as most days after his 29th birthday, he was incapable of playing football.

So, on this day, August 6th, the day Cole joined Chelsea in 2003, let's take a look back at some of the brightest highlights, and lowest nadirs.

Joe Cole joined the Blues on this day in 2003!  pic.twitter.com/rqpZTSOFFF

These shall be interspersed amongst each other, to guard against prolonged exposure to too much joy or too much sadness, but also because Joe Cole was nothing if not here, there and everyf***ingwhere.

And, just to add, we were going to include the infamous Milk Cup, but to save Joe some dignity, we decided against it. Still, #neverforget. With its incredible marriage of significance and skill, Cole's wondrous Premier League-sealing goal against Manchester United in April 2006 has got to go down as a top-five goal in Chelsea history, probably top three.

After some archetypal argie-bargie from Didier Drogba, Cole picks up the ball a few metres from the 18-yard box, with his back to goal and three Manchester United players closing in on him like stewards on a streaker. And, to clarify, these weren't just any United players. This was Rio Ferdinand, Nemanja Vidic and Mikael Silvestre. That's about as good as it got in England back then, save for Ricardo Carvalho, John Terry and William Gallas.

In any case, Cole wasn't too bothered, holding off first Ferdinand then Vidic with his strength, and in the meantime flicking the ball between his right and left foot with such speed and precision that it bamboozled all three, allowing the number 10 to eventually flick it past Rio, storm into the box, and curl it emphatically past Edwin van der Sar. Goosebumps. Before 2009, aside from a couple of torn muscles here and there and a bout of concussion, Cole had been relatively injury-free. But then, in January, the midfielder went and ruptured his cruciate ligament in a lowly FA Cup clash against Southend, and was out for nine months.

It was the beginning of the end of his ​Chelsea career, as well as the start of a gruelling journey down knee issue avenue. But wait, before the injury storm came that goal that was seen around the world. The goal that soared improbably over Andreas Isaksson's head. The goal that momentarily downed a million Swedes (they came back, obviously. This was England at a major tournament, after all).

It is one of the great World Cup goals, its pantheon pass granted principally thanks to its chested beginnings and its visit onto the post before its spiral into the net. Spectacular. Cries of 'he's not that kind of player' rang out during Cole's Liverpool debut, but unfortunately they fell on deaf ears.

That's right, just 45 minutes into his Reds career, Cole had seen red himself, lashing out at new Arsenal signing Laurent Koscielny, and duly receiving his marching orders with a red card. It's fair to say it predetermined a difficult time on Merseyside. 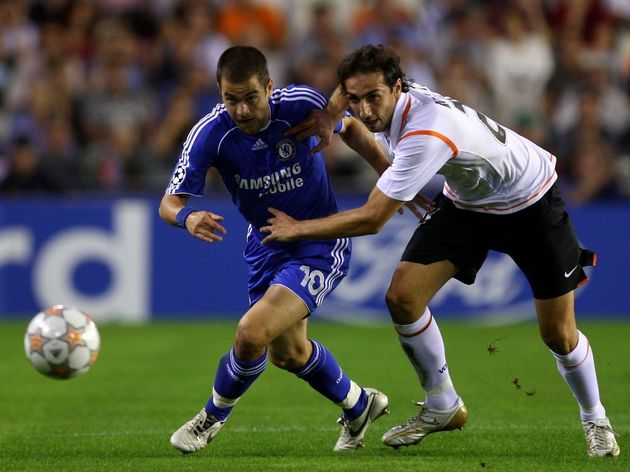 It is just a shame that a) it was his last truly great season in football and b) it wasn't capped off with the ​Champions League success it deserved. Had it been, Cole would be indelibly tied to the club's greatest ever achievement. It started with a fairly successful loan spell at Lille, in which he was initially rumoured to be commuting from London but ended up embracing the life of leafing through L'Equipe and sipping espressos.

So, not too low, all things considered.

But the moves didn't stop, and they didn't get better. An emotional return to West Ham ended after six months, a spell at Villa was interrupted by a curtly shipping off to Coventry and it all ended in ignominy with the Tampa Bay Rowdies in the USL Championship, the second tier of American 'Soccer'. Sigh.

The Englishman notched nine goals and six assists at Lille, but his biggest achievement was undoubtedly convincing Eden Hazard to join Chelsea, handing the club the number 10 they'd been crying out for ever since he left back in 2010.

What makes this even more impressive, and the appropriate crescendo for a True Blue, is the fact that he was of course on loan from Liverpool at the time, who were also keen to sign the Belgian.