Diego Costa is football's equivalent of marmite - you either love him or (more likely) you hate him.

The Atletico Madrid man is known for his hot temper and he is not afraid of telling you how he feels, just ask referee Gil Manzano.

Manzano was left with no choice but to show Costa the red card in Atletico's 2-0 defeat to Barcelona after ​the striker couldn't control his mouth, but that was by no means the only highlight of Costa's controversial career.

Here are nine of his craziest moments ever...

Making a Name for Himself Early

In a 2007 meeting with Benfica, Costa found himself chasing a loose ball. How did he go about trying to win possession? By driving his foot into midfielder Petit's thigh to incapacitate him.

It was a real leg-breaker, but Petit fortunately managed to walk away unscathed. Costa would never spit at anyone. Spitting is far too dirty for him. However, spitting into his hand and flicking at someone is a totally different question.

The unlucky target was Sergio Ramos, during a Madrid derby in 2012. Costa was seen clearly loading his hand up with spit, before launching it in the direction of the defender, unbeknown to the referee.

Granted, Ramos appeared to spit at Costa first, and that itself came after Costa aimed a headbutt at the Real Madrid man, on what was a busy day for both. Meeting new people can be a daunting experience, especially if you don't even speak the same language. But not if you're Diego Costa.

After signing for ​Chelsea in 2014, he was introduced to new teammates John Terry, Gary Cahill, Branislav Ivanovic and Nemanja Matic. He spoke very little English, but knew one phrase to introduce himself.

"I go to war. You come with me," Costa roared at the group. As you do. ​Costa has a reputation as a man who prefers fighting to playing football, and he certainly didn't help his case when he came up against Arsenal in 2015.

Never one to shy away from a battle, Costa found himself fighting Gabriel Paulista, reacting to some contact by pushing the Brazilian to the ground before swinging a hand at him. The referee tried to calm everyone down, but Costa did not let it drop, and lured Gabriel into aiming a sly kick at him, resulting in a red card.

This all came after he raised both hands to Laurent Koscielny's face, and he even caught the Frenchman with yet another swing. Not one of his finest days.

His Rampage Against Liverpool 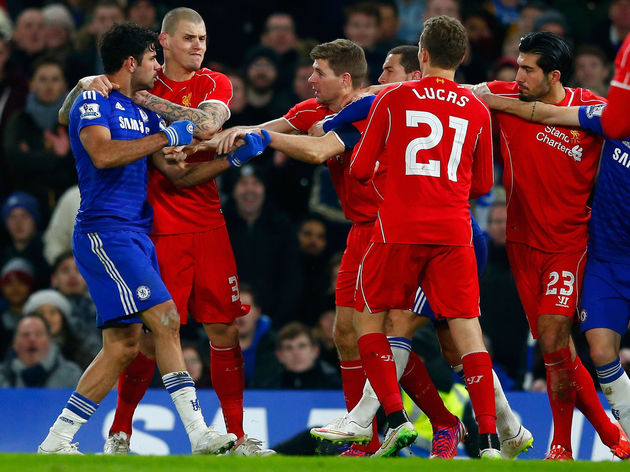 He began by stamping on Emre Can, before moving on to notoriously scary skinhead Martin Skrtel. You would have thought two fights would be enough for the striker, but he was nowhere near finished.

His final target was Steven Gerrard. The two tangled in a clumsy challenge, and Gerrard chose to square up to Costa with an incensed look on his face. Costa, being Costa, welcomed it all by challenging Gerrard to try and fight him. Classic.

Throwing His Bib at Jose Mourinho The striker was dropped after a poor run of form and, after being told he would not be brought on, reacted by throwing his bib in the direction of Mourinho, before angrily taking his place back on the bench.

Mourinho insisted that there was no problem between the two, so Costa certainly got off lucky.

His Tussle With Gareth Barry When ​Chelsea faced ​Everton in 2016, Costa was clearly in no mood to play, and it was Gareth Barry who felt his wrath.

The two had been at each other all game, with Costa just jumping into Barry's back at one point, but a cynical foul from the Everton man later on was the final straw as Costa squared up to Barry, lunged his head towards him and even looked to be channelling his inner ​Luis Suarez by aiming a bite at Barry's neck.

It's alright though, because Costa gave Barry a little loving cuddle before being swiftly shown a red card. The Blues posted a ​video of the session, which begins with Costa running away from his teammates to commandeer a nearby equipment cart before driving it around the field to wreak some havoc.

Why did he do it? Costa never needs a reason. 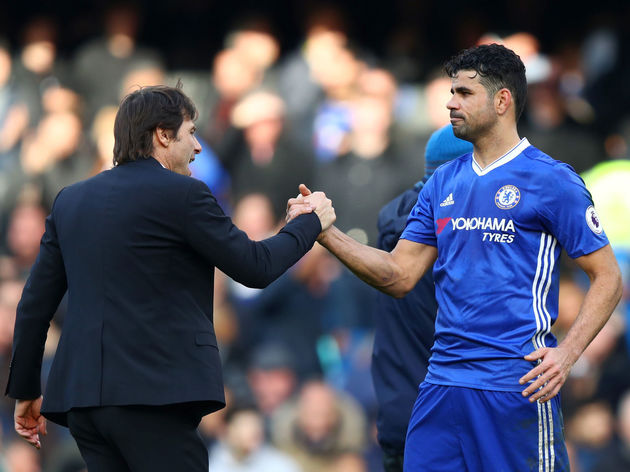 The two may have ended on poor terms, but Costa was clearly a fan of Antonio Conte after the Italian steered them to Premier League glory in 2017.

As Conte was speaking to the press following the triumph, Costa clearly got bored. He began dancing in the crowd and doing pull-ups on a nearby bar, before threatening those in attendance with a fire extinguisher.

He then walked onto the stage alongside ​David Luiz and dragged Conte to the back to celebrate, screaming "Champions!" as he did so. And you wonder why they fell out.