​Sam Kerr has been offered a two-year contract worth $1m (£500,000) by Women's Super League outfit Chelsea.

The Australian striker has been in electric form at the Women's World Cup, finishing the group stage campaign as the tournament's joint-top scorer with five goals to her name. 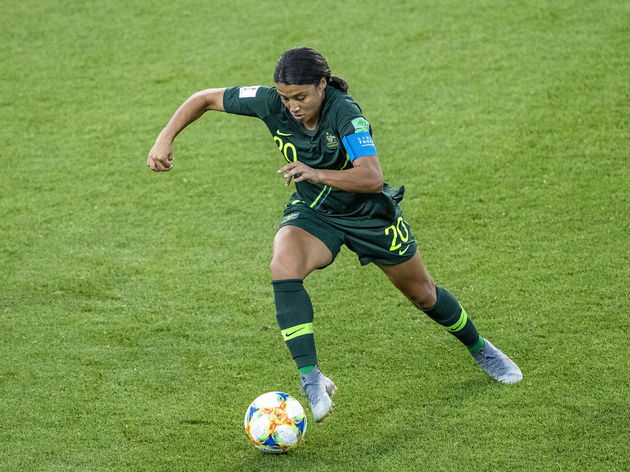 According to ​Fox Sports Australia, Kerr has been offered a bumper deal by ​Chelsea and now has to decide between making the move over to England or remaining in Australia with W-League outfit Perth Glory.

Football Federation Australia chief David Gallop has also confirmed the report but added that he would like Kerr to stay put.

“We will definitely sit down with her after the World Cup and discuss where she sees herself next," he told the Daily Telegraph. "Her spot at Perth Glory and in the W-League is a tremendous thing for the club, the competition and the sport.

“The opportunity for her to lead us into a home soil Women’s World Cup in 2023 is so exciting. We appreciate that playing for a big club overseas would be wonderful for her, too.

“I see her as a pioneer of a new era for women’s sport and women generally because she has pushed a barrier over that will be remembered as a unique moment in time.

So proud of the Matildas and what this team is all about. Keep breaking them barriers and helping kids to follow their DREAMS. Big love to my girl @samkerr1 For laying down the foundations for the next generation, keep enjoying your football and scoring loads of goals ⚽️ pic.twitter.com/wmoyNpUvWQ

"Now we see women, girls, men and boys wearing Matildas jerseys and even crossing out the name of a Socceroo on a men’s jersey and replacing it with Kerr.”

Kerr will be in action for Australia against Norway in the Round of 16 on Saturday evening as she looks to inspire the Matildas to the quarter-finals for the fourth consecutive World Cup.