Chelsea reaffirmed their top four ambitions with a comfortable 3-0 victory over relegation-threatened Brighton at Stamford Bridge on Wednesday night.

The Blues dominated possession throughout the opening 45 minutes with Arrizabalaga relegated to a spectator role, although chances remained at a premium until Callum Hudson-Odoi tore past his marker and crossed for Olivier Giroud to flick past Maty Ryan for the game's opening goal seven minutes from the half-time interval.

Giroud's goal opened the floodgates as Eden Hazard and Ruben Loftus-Cheek wrapped up the match with two terrific curling efforts in the space of three second-half minutes.

Throughout a frustrating campaign, patience has been the keyword associated with the stupendously talented Hudson-Odoi. The youngster, himself, has had to be incredibly patient, while the Chelseasupporters clamouring for his inclusion have had to be equally patient.

This 18 year old make so much happen. Too good.

Hudson-Odoi's direct running, dribbling ability, decisiveness and pace is something we've lacked for a long time on the right wing. He's always ready to stretch the full back and he's a good crosser of the ball. #CFC #CHEBHA

9 - Callum Hudson-Odoi has been directly involved in nine goals in his nine starts for Chelsea in all competitions, scoring four and assisting five. Talent. pic.twitter.com/8vaFrMpgP6

Callum Hudson-Odoi has improved massively, not only a great assist for Giroud but also tracking back and getting better defensively.

The galvanised Chelsea team was buoyed by the energetic Hudson-Odoi, with his desire to take on anyone who dare cross his path leading to a terrific assist for Giroud's opening goal.

While much of the post-match reaction will focus on Hudson-Odoi, Hazard continued to showcase why Chelsea supporters should be so fearful of his impending departure to Real Madrid.

Hazard is sensational. One of the best, if not the best, N'Golo has ever shared a dressing room with. Orchestrating this game masterfully

The winger was at the heart of every Chelsea attack, with his ability to open space through sublime dribbling and cross field passes key to his side eventually breaking down a stubborn Brightondefence.

Eden Hazard has 26 goals/assists in the Premier League this season, most of all players tied with Aguero.

Heading into Wednesday's clash with Chelsea, Brighton have been the antithesis of Wolves' big match heroics, picking up zero points against the big six, while scoring just one goal on their travels against the Premier League's elite sides.

Since promotion, Brighton have W0-D0-L9 away at Big Six teams with 7/9 losses arriving 'to nil'.

That negative statistic did not get any better at Stamford Bridge as Brighton were thoroughly outclassed in another scoreless outing.

The Seagulls' record will have to improve rapidly if they are to reach a fairytale FA Cup final, as a Manchester City side that has won 20 out of their last 21 matches, the daunting semi-final task.

Brighton defended bravely for the majority of the first half with Duffy the crucial component in an organised display.

Unfortunately, for the centre-back, his side collapsed after Giroud's opening goal with a tame second-half performance leading to the seismic deficit.

 @shaneduffy denies Giroud inside the area - in textbook fashion!

While no one in the green away strip put in a memorable performance, Duffy was the best of a mediocre bunch and can hardly be faulted for any of the goals conceded.

Chelsea host West Ham next in a pivotal London derby on Monday night, before traveling to the Czech Republic to face Slavia Prague in the first leg of their Europa League quarter-final clash. 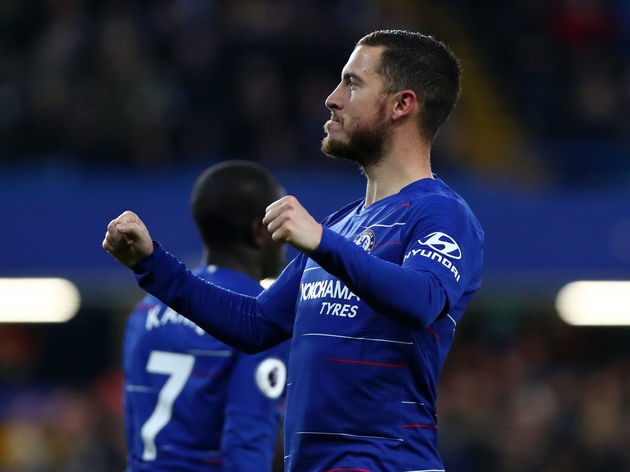 Chris Hughton's side will be returning to London on Saturday to play Manchester Cityin a monumental FA Cup semi-final at Wembley. The Seagulls will then turn their attention back to the Premier League relegation battle with a south coast derby against Bournemouth.