The stage was set for a magical European night at Stamford Bridge.

Following a 0-0 stalemate at the Camp Nou, Guus Hiddink's Chelsea would've been quietly confident of progressing to the Champions League final for the second consecutive season despite an imperious Barcelona side arriving in SW5 for the second leg.

And after Michael Essien had thunderbastarded (new word?) the Blues into a swift 1-0 lead, that sneaky confidence pre-game elevated dramatically. Eric Abidal's dismissal midway through the second half heightened Blue hope before their dreams of avenging their defeat in Moscow against Man Utd were dashed in the third minute of added time, as Andrés Iniesta fired past a previously untested Petr Cech from the edge of the area to send Barcelona through to the final on away goals.

In between all that, however, was a refereeing display so incompetent it raised questions as to whether it was all part of a bigger conspiracy to avoid yet another all-English final between United and ​Chelsea (we'll leave the theories for now though).

While a few of the decisions you'd see on the compilation video of the scandal were more 50/50, there's little doubting the Blues were denied three stone wall penalties by the man in the middle

Incident one: Florent Malouda was adjudged to have been fouled by Dani Alves outside the area - it was inside.

Incident two: Nicolas Anelka's flick was handled by Gerard Pique - let's just say if this moment came in a Sunday league encounter, it would've been met with a 'just the one hand' jeer from the sideline. A certain pen in the age of 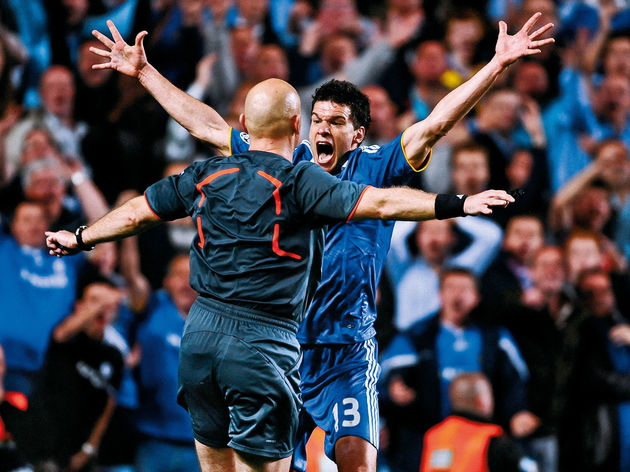 Incident three (after Iniesta's equaliser): Michael Ballack's volley crashed against Samuel Eto'o's tricep - the Cameroonian's arm couldn't have been in a more unnatural position, right in front of Ovrebo.

As you can imagine, unsavoury scenes followed the final whistle.

It's time to appreciate what was an outstanding Chelsea performance that night. Hiddink's plan to lock up the visitors worked a treat, with the Dutch boss opting to man-mark the technically proficient opposition all over the pitch. Ashley Cole did a superb job in limiting the influence Lionel Messi had on proceedings while the aggression of José Bosingwa on the opposite flank frustrated whoever entered the Portuguese's zone.

The midfield two of Essien and Ballack were ably supported by Frank Lampard in what became a 4-5-1 mid-block out of possession - with their compactness ensuring Barcelona struggled to penetrate centrally throughout. The work of the midfield pivot certainly made life easier for Alex and John Terry, although the centre-back duo defended the box expertly - with Barça often forced to deliver low percentage crosses in a bid to create chances.

The home side were also a greater threat going forward, with the Blues opting for the direct route so they weren't caught out by Barca's fierce counter-press in their half. Nevertheless, they caused the Spanish outfit problems throughout - with Drogba spurning a golden opportunity to put Chelsea 2-0 up at the start of the second period.

And despite it seemingly being a whole federation against the west Londoners that night, Chelsea still came within a cleaner Essien clearance from progressing to the final. This was a performance that certainly would've got greater attention if Chelsea had progressed. Frank Lampard starred against the Catalans.

While the Blues only had their moments in possession, Lampard was usually at the heart of everything the home side did with the ball; intelligently kickstarting swift attacking transitions with wonderfully executed first-time passes in behind the Barca backline in the opening period before showing on many occasions in the second period his composure to break away from Barça pressure.

But it was off the ball where the current Chelsea boss really impressed.

When the Blues decided to press it was the advanced midfielder who set the tone - with Hiddink's side using several triggers to disrupt Barça's rhythm in the first and second phases. Lampard's main task, however, was nullifying Sergio Busquets - a role he perfected as the Spaniard struggled to find enough time and space to cause the Chelsea backline problems with vertical passes.

Sky commentator Andy Gray's groan of 'oh no' after Iniesta's late strike perfectly summarised what had unfolded on that May night; Barcelona This was a night where Barça struggled all over the pitch; defensively they looked vulnerable without the suspended Carlos Puyol against the directness of the hosts, they often failed to win their one-v-one battles down the flanks and in central-midfield, while Eto'o and Messi barely got a sniff.

The fluidity of the front three stagnated as the game wore on and on the whole, a normally so coherent unit just didn't look on the same page at the Bridge.

In the end, however, they were bailed out by a string of horrendous refereeing decisions which went in their favour, along with Iniesta mastering an incredibly hard technique to bag an unlikely equaliser. It was by no means a vintage Iniesta display, but it was his right Total 90 boot which sent his side to the final.

After Chelsea - specifically Essien - failed to clear an Alves cross from the right, the ball fell to Messi just inside the area who jigged inside before teeing up Iniesta on the edge of the area.

The Spaniard's effort looked a little bit like a 'swinger' but the technique was incredible, using a combination of his lace and the outside of the foot to fire the ball past Cech and into the top-left corner. An injustice certainly, but at least it was a special goal to send Chelsea packing.

What Aged the Worst It's no surprise that Ovrebo's career was never quite the same following his 97 minutes or so of incompetence under the bright Stamford Bridge lights.

The five-time Norwegian Referee of the Year would never take charge of a ​Champions League fixture again and failed to make the cut of European refs selected for the 2010 World Cup. He eventually called it quits on what was a fine career overall in 2013.

What Aged the Best Despite the asterisk placed on their Champions League

Guardiola's Juego de Posición philosophy reached its peak two seasons later, however, with the 2010/11 Barcelona side reshaping our perception of how aesthetically pleasing the game can be, as Generation Z grew up idolising La Blaugrana.

While it wasn't a treble-winning campaign, performances such as the unforgettable 5-0 victory in El Clásico and the 2011 Champions League final against United The forgotten man of those Guardiola Barça sides was Mali international Seydou Keita - who endured a miserable evening at Stamford Bridge. Nevertheless, the versatile midfielder, capable at both ends of the pitch, enjoyed a stellar career in Catalonia - winning 14 trophies in four seasons at the club.

Stoke icon Bojan Krkic, Eidur Gudjohnsen and an ageing Sylvinho are all honourable mentions for Barça, while on the Chelsea side, remember the king of the thunderbastard Alex? What about the mightily underrated Florent Malouda? The Frenchman played an important role in shutting out Dani Alves that night.

And if they're not obscure enough, let me chuck a José Bosingwa at ya - the right-back put in his finest display in a Chelsea shirt against La Blaugrana. The Catalans went on to make lighter work of Premier League

Continental success confirmed an unprecedented treble for Pep's side, who had secured both the La Liga title and Copa del Rey a week after their semi-final victory over the Blues.

Chelsea, meanwhile, would have to wait three years to avenge the 2009 defeat to Barça. Following Premier League triumph in 2010 under Carlo Ancelotti, Roberto di Matteo guided the west Londoners to an unthinkable Champions League victory in 2012 - sh*thousing past the Catalans at the same stage they faltered three years prior - with arguably a far weaker squad - before going on to beat Bayern in their own bloody backyard in the final. Glorious stuff.

Opinions on the all lowercase lettering on the back on the Chelsea strip that season? I'm still unsure.

The big one: Was Ovrebo part of a wider conspiracy to send Barcelona through to the final?