Billy Gilmour was one of Chelsea's young stars who was given a chance to impress Frank Lampard during pre-season.

He was arguably the most impressive Blues starlet during those early months of the season and - a Premier League substitute appearance against Sheffield United later - the 18-year-old has since been rewarded with a new contract with the club. Here are seven things to know about the latest Chelsea starlet.

He's No Stranger to Playing Above His Age Group An 18-year-old playing against seniors is impressive enough but, for Gilmour, it's just another day in the office.

When he turned 15, he was promoted to Rangers' Under-20 side, but was soon fast-tracked to the first team after his talent became clear. He featured in provisional matchday squads for Rangers, whilst he has also been a regular feature for Scotland's Under-21s.

Even at ​Chelsea, Gilmour has plenty of experience in the Under-23 set-up, so playing against senior players is nothing new to him.

He Attracted Interest From Europe's Elite

With a 15-year-old Gilmour on the cusp of senior football back in 2016, many of the elite sides around Europe took notice.

Think of any top side around the world, and chances are they were interested in Gilmour. ​Manchester United, ​Manchester City, ​Real Madrid and ​Barcelona were all eager to win the race for his signature, but a trip to Chelsea's Cobham training complex ultimately won him over.

If he keeps up this development, it would come as no surprise to see those sides reignite their interest.​ Whether Chelsea would be interested in selling him remains to be seen.

He Is a Creative Machine Onto his play style, Gilmour is the kind of midfielder managers adore. Comfortable anywhere in midfield, Gilmour's primary mission is to get on the ball, whether that means dropping deep or pushing forward.

One of the most impressive things about the teenager is his composure. He is almost impossible to fluster, and he uses his technical ability to pick out passes all across the pitch.

Similar to Andres Iniesta, Gilmour wants to dictate the tempo of a game, but he is not satisfied with just passing the ball. He wants to be part of every phase of play, and he's certainly good enough to do so.

He Still Loves a Tackle 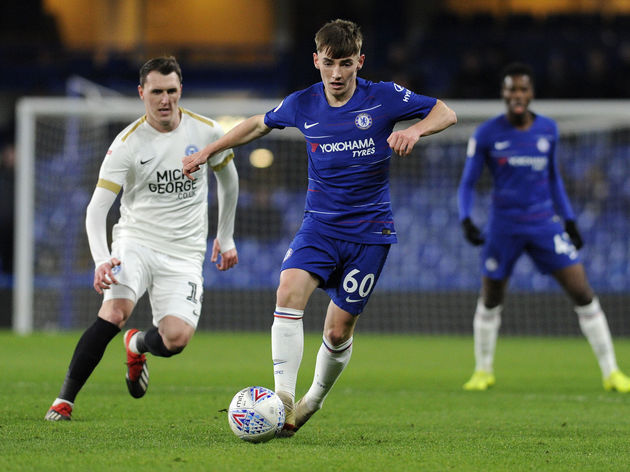 These slender, creative midfielders often shirk the physical side of the game, but that cannot be said for Gilmour.

Whilst he's no ​N'Golo Kante, the diminutive Scot is not afraid to put his body on the line to recover possession, such is his desire to have the ball at his feet.

His temper can get the best of him at times - he has picked up red cards playing for both Chelsea and Rangers' youth sides in the past - but it is nothing to worry about at this stage. He will give his all for his team, which can only be a good thing.

Frank Lampard Sees a Bright Future for Him Lampard told ​Chelsea TV just how impressed he had been with Gilmour, hinting at a potential role in the team for the teenager by expressing his desire to see Gilmour maintain this level of performances for the remainder of the season.

The quality of opposition will certainly improve as the year goes on - as we've seen when he made his Premier League debut - but all signs suggest he is capable of rising to the challenge.

Breaking through at Chelsea has proven to be too difficult for countless youngsters in the past, but Gilmour has the kind of ambition and drive that a young player needs to make it at the top level.

He told ​BBC Sport that he only has one goal in football, and that is to become the best player in the world.

It is clear by his actions on the pitch that Gilmour is not satisfied with simply winning games. He wants to dominate opponents and do things fans can hardly believe, which will help him stand out at Stamford Bridge. It's like an unwritten rule in England. Anyone involved in football must decide who was the better midfielder - Steven Gerrard or Frank Lampard. For Chelsea fans, Gilmour chose the right answer.

In the same BBC Sport interview, he wasted little time to choose Lampard as his favourite player, and this was well before Lampard was even close to stepping into the dugout at Stamford Bridge.

He now has the chance to work alongside Lampard, who will undoubtedly be able to pass on some of his vast football knowledge. For Gilmour, the future is incredibly bright.