​In a week in which Chelsea officially appointed Petr Cech as their new technical and performance adviser, and are expected to hand the first team reigns to Frank Lampard, it seems as if the club are bracing for 12 signing-less months by reuniting a load of old pals behind the scenes.

Continuing the trend, then, here are six other former players the Blues could look to in order to fill backroom gigs.

John Terry is currently cutting his teeth as a coach at ​Aston Villa, helping them towards the ​Premier League in his first season after retirement. John Terry also, once, played in goals, for a few minutes in the dying stages of a fairly low-pressure league game away at Reading back in 2006 after Petr Cech and Carlo Cudicini both went off injured.

With Chelsea's coaching staff being shaken up after the departure of Maurizio Sarri, then, if Frank Lampard needs an experienced head to come in and work with Kepa there's only one man for the job. He didn't concede a goal in his entire professional career as a keeper, after all. After 68 goals, 26 assists and an injury list that trumps both, Daniel Sturridge is in need of a new club after not renewing his deal at ​Liverpool.

It's clear he can't manage 90 minutes week in week out without pulling his hamstring any more, so having picked up a vast knowledge of injuries over the course of his career he is well-placed to try his hand at being the new ​Chelsea physio.

Maybe he could earn a bit of extra on the side by teaching the strikers how to finish. With their only proven goalscorer in Eden Hazard off on his holidays, they could use it. Look at this man and tell me he wasn't born to be James Bond, or at least a bouncer at a semi-high-brow night club. If he tells you 'not tonight mate' then it is decidedly not happening tonight, mate.

His playing career went swimmingly, his management career...not so much. It might be time for Jimmy to progress into a third career path; taking bodies in the name of the incumbent Chelsea boss, especially on those visits to the London Stadium, where he is less than revered these days. They will undoubtedly have some outstanding debts to settle, because at least one of the clubs housing one of their loan players has to have shorted on their fees. There's over 40 of them, that's just balance of probabilities. This is where powerhouse midfielder Michael Essien comes into it - get him into your employ, get him on the plane to Vitesse Arnhem, and it'll be settled by the end of the day. A lot of big clubs are appointing people into this position in recent years - someone whose job it is to monitor and manage the various players the club has out on loan.

And no-one knows better how it feels to be a Chelsea player out on loan with little-to-no chance of a prolonged run in the first team than Ryan Bertrand. The left-back had nine spells out on loan while at Stamford Bridge, and made just 28 first team appearances for the Blues, before his permanent move to Southampton was finally sealed in 2015.

Of course, there's the small issue of him being 29 and far from finished as a player, with the likes of Inter interested in signing him from the Saints. But don't let that dampen your dreams, Frank. 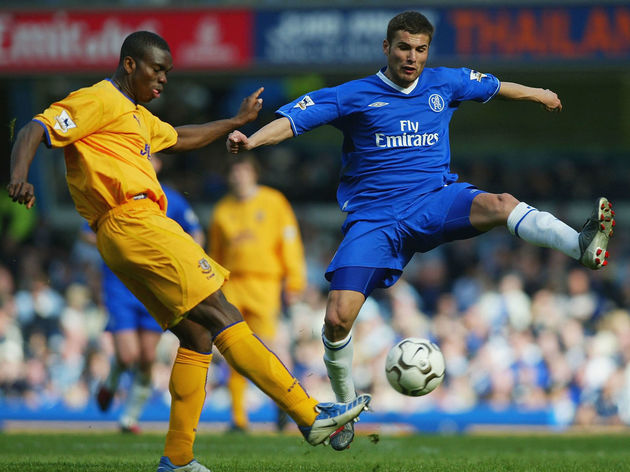 Last time Mutu was at Stamford Bridge, as one of Roman Abramovich's first signings back in 2003, he enjoyed a decent start...then was banned for alleged cocaine use and was sued by the club for