It was all going so well for Frank Lampard's Chelsea not so long ago.

Having lost talisman Eden Hazard to Real Madrid in the summer, and having given up on the Alvaro Morata experience, the Blues decided to put their faith in their academy products, and employed a coach with one year of managerial experience - and none at the top level. A recipe for disaster, one might say. And if their opening day shellacking at the hands of Manchester United was anything to go by, then it was set to be a long old season, indeed. But Lampard's lads turned their fortunes on its head, and the kids rocketed the Blues into the top four, leaving the other Champions League hopefuls eating their dust.

Fast-forward to January and the wheels seem to have fallen off Lampard's bandwagon - the west London club have won only three of their last nine matches. Hardly top-four stuff.

The ​Chelsea coach has been left bemused by his side's inability to kill off games of late, and their issues deepened on Tuesday evening, when top-scorer Tammy Abraham hobbled off against Arsenal with an ankle injury. With Olivier Giroud making kissy-faces at Inter, and Michy Batshuayi clearly not Lampard's cup of tea, the Blues face no other option than to delve into the market for a new striker. Edinson Cavani has been linked with a move to Stamford Bridge after handing in a transfer request at Paris Saint-Germain, but frankly that is far too boring for our liking.

So, 90min has decided to dive into the depths of the transfer market, and we've supplied a list of five goalscorers who Lampard should sign - but probably won't.

It wasn't too long ago that Andrea Belotti was the talk of the town. By the end of the 2016/17 campaign, Il Gallo had racked up 26 goals in 35 league appearances for Torino, and the Italian striker was being linked with a switch to some of Europe's biggest clubs. A move failed to materialise however, and the 26-year-old went on to have two less than inspiring seasons in Turin. 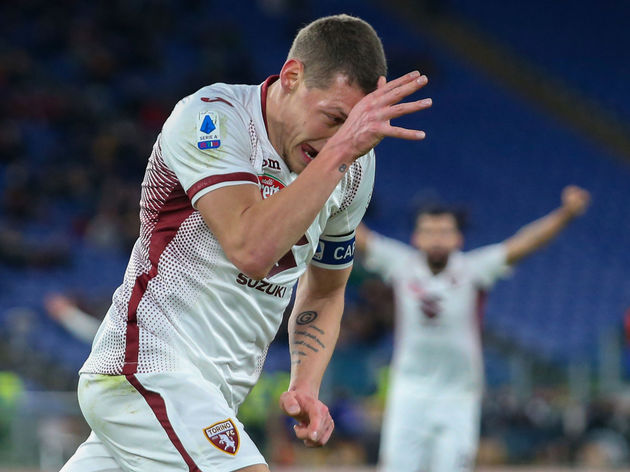 Belotti is back to his best however, and Europe should get back on hot alert. The star has scored nine goals in 18 games this season, and he has continued to shine, despite the lack of genuine quality around him. Belotti has dragged this team into the top half of the table, but it may be time the Rooster spread his wings.

Il Gallo has all the physical attributes to thrive in the Premier League - and he should be given the chance.

Tattoos, intimidating (and frankly mental) celebrations, and a hard-man attitude to match. Now this guy is Diego Costa Mk.II. If you don't know who Chimy Avila is, then get yourself onto a highlights reel and marvel at the shape and stones of this lad. Built like a middle-weight boxer, Avila bullies defenders for Osasuna most weekends, and probably pinches their lunch money afterwards. The 25-year-old terrorises teams with his robust approach, but his diminutive stature means he possesses electric pace to match his core strength. Avila's ability to use his body to his advantage is frightening - once he has the ball, you'd better roll out the bulldozer to get him off it.

But the Argentine striker has the skills, too. He has chimed in with nine goals for the struggling Spanish side, and some of them have been absolute beauties.

Seriously Chelsea - if you're not signing Chimy, then what is even the point?

French side Metz are treading water at the bottom end of the Ligue 1 table, but they'd be rock bottom if it weren't for Habib Diallo. The 24-year-old has bagged an impressive ten goals in 20 games for Metz this season, and his strikes have been enough to keep relegation excellentstrength, pace and ruthless finishing in front of goal this season, and his ability to play on the shoulder of the last defender will be music to Lampard's ears. Chelsea need a striker who can perform a number of different roles within the team, and Diallo can certainly do just that.

Is he the one, Lampard?

What if Chelsea want to continue their homegrown recruitment policy? Well, the highest scoring Englishman in the top flight is Danny Ings. ​Ings was signed by Liverpool in 2015, but a series of injuries prevented him from ever fulfilling his true potential. But with his fitness issues behind him, the 27-year-old is running riot at ​Southampton. Saints were struggling terribly before Christmas, but Ings has propelled his side to mid-table safety, bagging 14 goals in the process. The former Burnley man has shown a clinical streak in front of goal that Frank Lampard can only dream of at the moment.

Ings' electric form could be enough to convince Chelsea to give him a chance among the upper echelons of the Premier League once again.

One sniff at goal is all he needs, Blues. Go get him.

Joao Pedro is in the form of his life, and it's brilliant to witness. The Brazilian striker has helped Cagliari make a lightning start to the new Serie A season in their centenary year, and his 13 goals in 20 appearances have made him a standout performer for the Rossoblu. Pedro has spent the majority of his career playing behind the striker, but he has taken up a more advanced role this season, and both he and his club are reaping the rewards. The Cagliari forward has proved that, given the right service from wide areas, he can deliver the goods. Chelsea focus plenty of their play through the channels, and the Blues are dying for someone to tuck them away in the box.

A cheaper option - and much less fancied - but Pedro deserves a crack at the big-time.