It's fair to say it's been a busy summer for Chelsea. The Blues may not have been caught up in the constant rumour mill due to their transfer ban, but they have still managed to sign Mateo Kovacic and have seen Christian Pulisic put on the shirt for the first time.

It's clear that a transfer ban would act as a hindrance to any team, but in Chelsea's case it may just be a blessing in disguise. So much is made of the endless list of players who are shipped out on loan and are never to be seen again – and now they have the opportunity to step up.

RB Salzburg score with the last kick of the game but it's still been a fantastic display by the Blues! 

Lampard has already shown in his time at Derby that he trusts in youth, and he's certainly looked like carrying that over to the Bridge thus far. Chelsea began pre-season slowly, with a surprising 1-1 draw to Bohemians and a loss to Kawasaki Frontale in their third game, but have since been much improved. Mount had an outstanding loan spell at ​Derby last season, netting 11 times from attacking midfield. The Englishman has carried that form into pre-season, bagging three goals so far. Not a bad return from a midfielder.

The 20-year-old has recently signed a five-year contract extension at ​Chelsea, leading fans to believe that Lampard sees him as the future of the club. He has excelled early in his career, creating chances at will – and has the technical ability that most can only dream of. The Blues landed the American in a £58m deal in January, initially going back to Borussia Dortmund on loan for the rest of last season. It took him a little while to settle in to his new home in pre-season, breaking in gently after his Gold Cup exploits this summer, but he's impressed this last week.

Pulisic has been touted as the long-term replacement to Eden Hazard, and it's easy to see why – lightning quick, with a direct approach to terrify the opposition. He was in scintillating form against Red Bull Salzburg, scoring twice and winning a penalty for his side. Gilmour has been outstanding in pre-season for Chelsea. Blues fans will have recognised the 18-year-old's name, but it may well have been their first proper sighting of the youngster in action – and he didn't disappoint.

The starlet has spoken of his admiration for former Blues midfielder Cesc Fabregas, and it's clear to see why – his intelligent displays against Abraham has been attempting to break into the Chelsea team for a while now, but has often been sent out on loan for greater opportunities.

However, with the departure of Alvaro Morata on a permanent basis and the decision to not bring back Gonzalo Higuain, the Blues are left thin at the top of the pitch. Luckily for them, Abraham appears hungrier than ever to step in and fill the void. The 21-year-old found the net an impressive 26 times in 40 appearances in the Championship for Aston Villa last season, showing that he certainly has an eye for goal.

Abraham stands at 6'3, but he has also shown off his pace and agility. The Englishman clearly has all the attributes to succeed, and has started strongly in pre-season. Most notably, he found the net against Barcelona when operating as the lone striker. He will take up the number nine shirt for the season, once again showcasing the faith Lampard has placed in the talented forward. 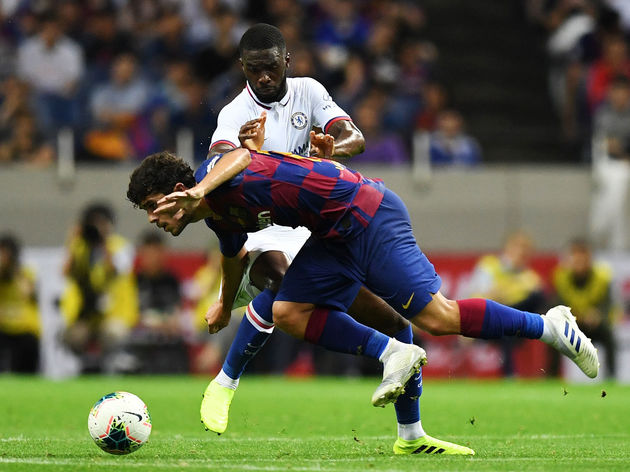 Tomori is a name Lampard knows very well from their time together at Derby last season. The 21-year-old was a fixture in the former England midfielder's Rams side, playing 47 games in the Championship in 2018/19 – but Chelsea have an abundance of centre-backs, with David Luiz, Antonio Rudiger, Kurt Zouma and Andreas Christensen all fighting for the two spots.

Tomori has had to be patient in pre-season, as Lampard has opted to rotate his defenders as he looks for the best partnership. However, he's done his chances no harm with some no nonsense performances when called open.

With ​​Everton pushing to sign​ Zouma, Tomori may see his chances improve if Lampard keeps him at the club for the 2019/20 campaign.